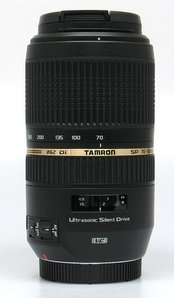 Tamron's SP 70-300mm f/4.0-5.6 Di VC USD lens is an affordable alternative for Nikon and Canon users who are looking for a powerful mid telephoto zoom lens. Being in their Di series, the A005 is compatible with both Full frame and APS-C (crop) dSLRs.

Tamron's first "premium" telephoto zoom lens, the A005 offers various improvements over their standard AF 70-300mm f/4.0-5.6 Di lens (A17). Looking at the two side by side, the first thing you'll notice is that the A005 is much larger. This is due to several factors, with the inclusion of their Vibration Compensation (VC) system being the prime reason. They've also switched up the internal construction quite a bit, with the A005 using a rear focus method compared to the front focus system used on most of their other offerings. Add in an Ultrasonic AF motor (USD), and a combination of both XLD (Extra Low Dispersion) and LD (Low Dispersion) lens elements, and you've got yourself one impressive unit on paper.

The A005 is a very well built lens, you can feel that as soon as you pick it up. Weighing about 1.7 pounds, it's quite heavy. In fact, If you use a battery grip on your setup like I do, you'll have to be very careful when setting the camera down as it will be front heavy. This also raises some concern when mounted on a tripod. You'll want to take extra care that all your tilting controls are nice and tight to ensure the lens (and camera) don't take a dive. While I can't see how they could incorporate such a thing (I'm not mechanical engineer), an added tripod mount that would attach to the lens barrel would have been a very nice addition to this lens kit.

The controls on the lens are also well put together. The rubber grip design of the zoom and focus control wheels offers a good firm grip, and I personally liked the large diameter of the lens barrel, which felt very comfortable in my hands. While the focus ring is located in the rear, instead of at the front like most of the lenses I own, I actually came to like this position a bit more; especially with the length of this lens. It allowed me to rest the palm of my hand on the battery grip, making it much more comfortable to adjust the focus; rather than having to reach to the front of the lens barrel. Some may have similar feelings, some may not. The focus ring moved nice and freely, however the zoom control was another story. I personally feel there's a bit too much resistance, which made zooming uncomfortable to me. It just takes some getting used to, however I think they would have taken away a bit of the resistance to make a smoother operation. The AF/MF and VC switches on the other hand could have used a bit more resistance, as I found them very easy to accidentally bump when pulling the camera in and out of my Crumpler bag.

While we don't have any complicated software to analyze the images captured from my 50D using the A005, or some of the charts used by many review sites that focus on lens reviews, I can say that I feel this new Tamron lens does quite well for a sub $500 telephoto zoom lens ($449.99 US to be exact). Looking at our sample images you can see the lens performed rather well at both the wide and full telephoto extremes, whether using a wide open aperture or stopping the lens down. At the full 300mm range I found the lens performed best when stopped down. I did have a few outdoor photos that were taken at the 70mm extreme which were not quite as sharp as I would have liked. However, this could have been a camera setting error on my behalf. The VC system seemed to work rather well, and allowed me to capture some nice 300mm handheld photos outdoors of some bald eagles. Whether or not you do get a full 4 stops of shutter speed advantage is still up for debate, however it seems like a very capable image stabilization system. Lens aberrations like CA (aka purple fringing) were very well controlled with only some small traces in our sample photos. The addition of the USD AF drive motor, which is a first for Tamron, was also very welcomed. The ultrasonic drive motor on the A005 allowed my 50D to quickly and accurately focus on a variety of subjects.

All photos taken using a Canon EOS 50D with the A005 attached, Aperture Priority mode, handheld with the VC system On, unless noted otherwise.