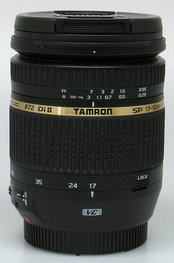 Tamron's latest entry in their "High-Speed Zoom" category, the SP 17-50mm f/2.8 XD Di II VC (aka B005) is an updated version of their normal 17-50mm lens (A16), which offers most of the same features like a lens locking mechanism, XR and LD glass elements, and a fast f/2.8 maximum aperture. However, Tamron has added their newer tri-axial Vibration Compensation system, which they claim will give you up to 4 stops of compensation compared to lenses without image stabilization. They also included their BBAR (Broad-Band Anti-Reflection) multi-layer coating which helps reduce the occurrence of lens flare and other pesky reflections.

This model is in Tamron's Di II series of lenses, which simply means it's designed for use with only Crop bodies that use an APS-C size image sensor. Using this lens on a 35mm film or full frame digital camera will result in strong vignetting (darkening of the outer edges of the frame), due to the lens' smaller image circle; which is optimized for the smaller APS-C sensors.While labeled a 17-50mm lens, this unit offers a 35mm equivalent view of approx. 26-78mm, depending on the system used. Currently, the B005 is available in both a Canon and Nikon mount. Nikon models require an internal focus motor in order to use the AF option on this lens.

The B005 seems to be a very well made and comfortable lens. With the zoom and focus control rings in your typical positions (zoom to the rear, focus to the front), handling and using this lens is a cinch. The manual focus ring moves quite easily, however that's not the case with the zoom control. Like mentioned in our A005 review, I think Tamron added a bit too much resistance in the zoom mechanism. This is of course all personal preference. The rubber grips offer a clean and firm hold on the controls, and the Lock mechanism is a nice touch. This helps ensure the lens does not move from the wide angle position. I see this function to be mostly desirable when transporting the camera and lens, however some may also use it to lock the lens at full wide angle.

The switches (AF/MF and VC) are placed in your typical positions on the left hand side of the lens barrel. This allows for quick access to the focus and stabilization options of the lens. I found the switches to be nice and tight, which helps reduce the possibility of accidentally bumping one of the them to a different setting. Two small announces I found with AF and VC systems was the noise. Both systems are very loud, which is something I noticed quite often. While this doesn't matter much when capturing still images (unless the noise bugs you), it might be an issue while recording video if your gear is capable of doing so.

While looking over our sample images that were captured using a Canon EOS 50D and the B005, I noticed a large majority of our wide angle, wide aperture photos were quite soft. However, once stopped down, the lens seemed to produce some ideal image sharpness throughout the zoom range. This is a bit of a let down as I was hoping to see some slightly better results when using the wide open aperture and 17mm end of the zoom. I personally was excited about this lens for portrait and wedding type photos. However, I'm not surprised as I've read other reports from users who felt the Non-VC model was a bit sharper. We also noticed some typical barrel distortion at the 17mm extreme, along with some traces of chromatic aberrations in many of our outdoor photos. I also noted some front focus issues when shooting photos of our kids during Christmas. This could have been an issue with the 50D's AF system, the lens, or a combination of both. However, I will note that I've not experienced this issue with my 50D in the past with any of my Canon glass.

Bottom line - Tamron's SP 17-50mm XR Di II VC (B005) performed "Ok" during our tests. While the equivalent focal range (approx. 26-78mm) and fast f/2.8 maximum aperture are appealing to a wide range of photogs, I was not very impressed with the overall sharpness of this lens when using it's wide open aperture settings. The addition of VC is appreciated, however from our findings and what we've gathered from other user reports, it seems that Tamron has sacrificed some image quality in order to incorporate this system. With a street price of about $649 US, the B005 is just over half the price of Canon's EF-S 17-55mm f/2.8 IS USM lens ($1180 US) and Nikon's AF-S DX Zoom-Nikkor 17-55mm f/2.8 IF-ED lens ($1540 US), so it does offer a great value when compared to the competition. Overall, I think the 17-50mm VC would work well for your typical shutterbug who captures photos for pleasure, however professionals will want to spend the extra dough on the big name models.

All photos taken using a Canon EOS 50D with the B005 attached, Aperture Priority or Manual modes, handheld with the VC system On, unless noted otherwise. Flash used was a Canon 580EX II.