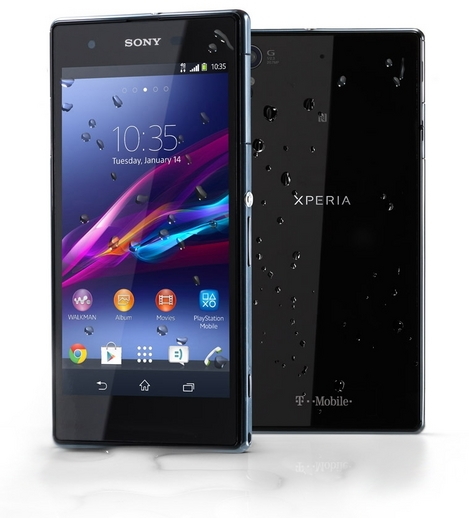 Sony has updated last year's Xperia Z1, dubbing this new-for-2014 model the Xperia Z1S. While most of the features are the same as the previous version -- we'll get to that in a moment -- the Z1S costs an extra $50 because it includes double the internal storage, a decent 32GB vs the the Z1's 16GB. However, both models allow for extra storage (up to 64GB) thanks to a microSD card slot.
Otherwise, the Z1S is the same powerful, waterproof Android smartphone as the one released last year. The Z1S ships with Android 4.3 Jell Bean, but may be upgradeable to 4.4.2 (KitKat). The waterproof and dust-resistant phone also boasts a 5.0-inch Full HD touchscreen display, a 2.2 GHz Snapdragon 800 quad-core processor, 2GB RAM, 4G LTE capabilities, Wi-Fi + Wi-Fi Hotspot technologies, NFC, GPS, Blue-tooth 4.0, and DLNA certification for use as a media streamer.
The Z1S has some impressive camera specifications as well. While both the front and primary/rear cameras are capable of recording Full HD 1080p videos, it's the rear camera that we have our digicam eyes on at the moment. 20.7-megapixels is a lot of resolution; hopefully we're not trading quality for quantity. The 8x digital zoom is nice too, but it's too bad there's not year a way to include an optical zoom while keeping smartphones pocket-friendly. Other features aim to help owners tap into their creative sides. There's picture effects, background defocus, HDR (for still and video), red eye reduction, scene selection, touch focus, image stabilization, and even burst mode and object tracking, which is great when you're shooting sports.
Finally, most Android users love these phones for plethora of helpful Google apps, but when Google teams up with Sony, you also gets ways to tap into Sony apps like PlayMemories (for sharing photos and videos), PlayStation, FM Radio, and Sony Entertainment Network TV, which you can (of course) watch in Full HD.
Sony Xperia Z1S Features
The Sony Xperia Z1S is available in black and without a contract, for T-Mobile at $599.99. See our lowest price box at the top right of this page to see the most current online pricing.