Finally, after a four year wait, Sony has announced the A700's successor; the all new SLT-A77. This is the most advanced translucent-mirror camera Sony has released to date, which is chock-full of their latest and greatest technologies. The most notable is their all new 24.3-megapixel APS-C Exmor HD CMOS image sensor, which is the World's first 24-megapixel APS-C sized sensor of its kind. This allows the A77 to capture unmatched resolution and detail from a crop bodied camera.

Another World's first is the A77's 3-way tilting LCD screen. Instead of one pivoting point, the A77's LCD has three (one on the body, and a dual-pivoting joint at the bottom of the display. This adds a great deal to the framing capabilities of this camera, allows you much more versatility over a fixed LCD screen. And, thanks to Sony's translucent-mirror technology, you can use the LCD to frame you photos with no worries about slower AF and shooting performance; like you'd encounter with any other DSLR system.

But, that's not all. The A77 has one more World's first under its sleeve, with the ability to capture still photos at 12fps at full, 24-megapixel resolution with full-time AF. This, and the ability to now record full HD (1920x1080) progressive AVCHD video are thanks to Sony's next generation BIONZ processing unit. Along with these blazing fast burst mode speeds, the A77 also boasts increased shooting performance and shutter response, thanks in part to an electronic first curtain.

As you look over the specs, it just keeps getting better. Like past SLT models, the A77 does not offer an optical viewfinder like one finds on all other DSLR systems. Instead, the A77 gives you a full-time live view image. This is projected to your eyes on an all new OLED "Tru-Finder" EVF, with 2.5 million dots of resolution. Autofocus is handled via a new 19-point AF system, with 11 cross-type sensors. The A77 is no doubt a powerhouse, that built for two things; unmatched speed and resolution.

We are itching to get our hands on one of these bad boys, so stay tuned as we update this page once Sony is gracious enough to send us a SLT-A77.
Sony SLT-A77 Features:
The SLT-A77 with start hitting dealer's shelves in October (2011). The SLT-A77 will come in the following configurations:
Additional Product Views: 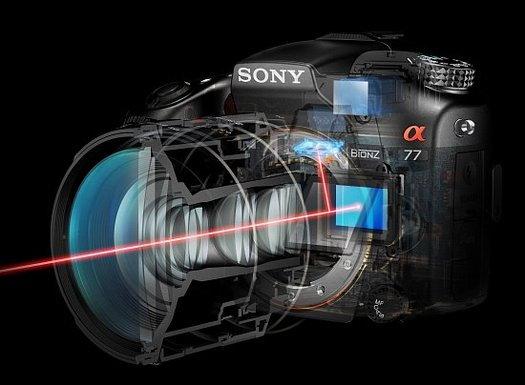