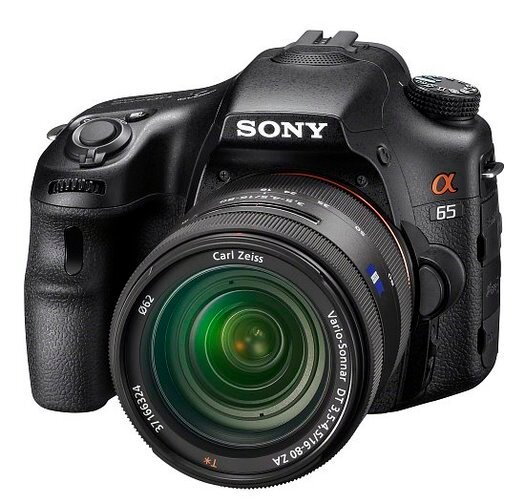 Alongside the SLT-A77, Sony has introduced the SLT-A65. This model is labeled as their top "entry-level" (sub $1000) dSLR, which is the actual successor to the SLT-A55. This unit borrows features from its predecessor, like the 15-point AF system, however it also shares many of it's features with the A77. Of these are the all new 24.3-megapixel APS-C Exmor HD CMOS image sensor, BIONZ processor, New AVCHD progressive video capture options, and the all new OLED "Tru-finder" EVF.

While not quite as fast as the A77, the A65 still boasts 10fps still image capture at full 24-megapixel resolution; which is nothing to shake a stick at. Other important features include a 3.0-inch rotating LCD with 921k dots (same as the A55), built-in GPS, SteadyShot built-in to the body, etc.

If you're in love the specs of the A77, but can't quite swing the extra coin, the A65 looks to be a promising alternative. We'll update this page once we get a SLT-A65 in for testing.
Sony SLT-A65 Features:
The SLT-A65 with start hitting dealer's shelves in October (2011), and will come in the following configurations: