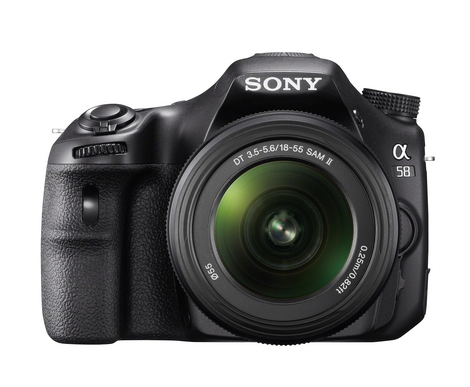 Sony has announced the successor to their SLT-A57, with the all new Alpha SLT-A58. This model focuses on offering "elevated performance, in a highly affordable package", with many of the same features we saw introduced on the A57 back in March of 2012. Sony has added some new enhancements, including a new 20.1-megapixel HD CMOS image sensor, an updated BIONZ processor, a new OLED Tru-Finder EVF, and their Auto Object Framing technology.

What is Auto Object Framing technology you ask? Well, it's a new process that helps you create photos with 'better', more professionally looking composition. The camera is able to automatically alter the framing of your shots after you've captured them by analyzing the scene you've captured (whether it's a portrait, landscape, or macro shot). The A58 will then automatically trim the image to give you a more "professionally-styled composition", along with boosting the resolution back up to 20-megapixels through their "By Pixel Super Resolution" technology (aka interpolation).

Some of the other key features can be found below. The A58 looks like a very appealing camera in the entry-level market; especially with the kit price of $599 USD.