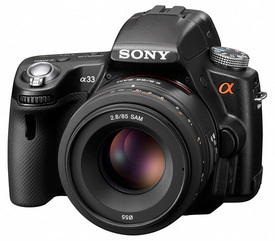 The Sony A33 represents an entirely new type of interchangeable lens camera that Sony refers to as Single Lens Translucent (SLT). This new SLT series camera departs from traditional dSLR designs by allowing a full time Live View feed from its imaging sensor to its built in EVF or LCD, while allowing simultaneous Phase Detect Autofocus. This was accomplished by using a fixed Translucent Mirror that allows most of the light being seen through the lens to pass through the mirror to main imaging sensor so it can provide a Live View feed, with the mirror reflecting light into the camera's Phase Detect Autofocus Sensor assembly for fast Autofocus performance.

This is a bold new design, since Sony eliminated the Optical Viewfinder and associated Prism entirely in the A33 (using an Electronic Viewfinder in its place), allowing for a smaller and lighter interchangeable lens camera with significant performance benefits, since the Translucent mirror design allows the the fast Phase Detect AF Sensor assembly to see the image from the lens all of the time, even in between still photos or when recording video, with no "mirror flipping" and associated AF sensor blackout like you'd have in a traditional dSLR design. So, unlike other dSLRs, the new A33 can focus and shoot at the same time, with the fast speed of Phase Detect Autofocus for both still photos and video recording. The Sony A33 camera can shoot full, 14.2 MP resolution pictures at up to 7 fps including Autofocus and Autoexposure between frames using its Advanced Priority Mode with the Aperture setting locked, making it a great option for consumers needing a high performance interchangeable lens camera at a budget price point. Like mentioned above, this new Sony model uses a Phase Detect Autofocus Sensor design with 15 focus points, of which 3 are cross type for enhancing focus speed and precision.

The A33 uses a Sony Exmor HD CMOS sensor (as found in the Sony NEX-5), and provides 14.2MP of resolution from a sensor size of 23.4 x 15.6 mm, allowing capture of both still images and HD video while providing a Live View feed to its LCD or EVF. Since the A33 uses Sony or Minolta A Mount lenses, it maintains full compatibility with lenses designed for Sony's existing Alpha mount dSLR models. The A33 also includes Sony's sensor based SSS (Super Steady Shot) system, so that any lens you use on it (including older Minolta Autofocus Lenses) takes advantage of in body stabilization, allowing you to use slower shutter speeds than normally possible without a tripod, without blur from camera shake.

The A33's ergonomics were much better than expected, as Sony implemented a surprisingly good interface design with a body that has great button placement for frequently changed settings; making it a pleasure to use. The A33 measures approximately 4 7/8 x 3 5/8 x 3 1/3" (124.4 x 92 x 84.7mm) and weighs in at approximately 17.35 ounces (492 grams) with battery and media. Not only is it smaller and lighter than Sony's traditional A Mount dSLR models, it's loaded with features. This model includes a superb 3 inch, XtraFine TruBlack LCD providing tilt and rotate, with approximately 922,000 pixels of resolution. In place of an optical viewfinder, the A33 uses a 0.46" Xtra Fine EVF (Electronic Viewfinder) with approximately 1.44 Million Pixels providing 100% frame coverage with 1.10x Magnification, a diopter adjustment, and we found it a pleasure to use compared to the smaller optical viewfinders that are typical on traditional dSLR models in this price range.

The A33 gives you available ISO speeds from ISO 100 through ISO 12800, with RAW and JPEG image capture using a variety of setting combinations for fine tuning of the camera's output. The A33 also includes a Multi-Frame Noise Reduction mode with a sensitivity of ISO 25,600 by taking 6 images in a fraction of a second and automatically combing them in camera to reduce noise levels when you need to take photos of still subjects in very low light without a flash. The A33 also includes Autofocus with Face and Smile detection, a Sweep Panorama mode that lets you swing the camera from right to left while it takes a rapid series of photos, merging them together automatically to produce a Panorama image, with no tripod needed. Sony also included a 3D Sweep Panorama mode that creates images you can see in 3D using compatible monitors and 3D glasses.

As we've seen in other newer Sony models like the NEX-5, an Auto HDR mode was also included in the new A33. This mode takes multiple photos in rapid succession using different exposure settings to capture a greater range of light to dark, then merges them in-camera to create a higher Dynamic Range image; all without a tripod since it automatically accounts for minor framing differences when merging the burst of images captured. Not only does the camera include a variety of scene modes like Portrait, Landscape, Macro, Sports action, Sunset, Night Portrait and Handheld Twilight; the A33 includes an Intelligent Auto mode that's designed to automatically predict the Scene Selection mode that is optimized for the scene you're shooting and apply the appropriate settings. This is much like the intelligent or smart Auto modes you see on consumer point-n-shoots, making it easier for a new user to get photos while learning more about what the camera offers.

For greater versatility, the A33 supports both Memory Stick Pro Duo cards (and we'd suggest the 30MB/Second Pro HG Series for best performance) and SDHC/SDXC cards. The A33 uses Sony's Infolithium battery system that lets you know the battery life remaining, with a CIPA rating of 270 photos using the EVF, or 340 photos using the LCD. We used the camera without a flash taking hundreds of photos indoors of live music, and were still able to take more photos outside the next day without recharging it; finally reaching 729 photos on a single charge, even though we were shooting raw + jpeg with the camera writing two files for each photo. Use of the built in flash, changing focus distances more frequently, and keeping the LCD or EVF on for longer periods of time would increase battery consumption.

For shooting control, the A33 has a wide range of options available, including Auto, Manual Exposure, Programmed AE, Shutter Priority and Aperture Priority with a variety of scene modes. The Sony A33 also offers a wide variety of Creative Styles, each individually settable for contrast, sharpness and saturation, and also has the ability to use a Custom White Balance (in addition to the presets available for different conditions like Tungsten, Sunny, Flash, Shade, Cloudy and Fluorescent). It also lets a user dial in a manual color temperature if desired, with green/magenta compensation available. The Sony A33 offers Metering Options including Spot, Center Weighted and Multi-Segment (Matrix), with the 15 Point Phase Detection System working extremely well in a wide variety of lighting conditions.

The A33 has outstanding image quality at lower ISO speed settings, and we found that images were quite usable for most print sizes through ISO 1600, even though noise and noise reduction were starting to reduce detail at that point, with even higher ISO speeds still very usable for smaller print or viewing sizes. Given that some of the light is lost via this camera's Translucent mirror design in order the reap the benefits of having full time Phase Detect Autofocus while shooting stills or video, we were left with the impression that it offers a very good balance between image quality and usability via it's nice EVF in dimly lit conditions like the low light live music photos in the A33 Review Samples, with the bright EVF making this camera quite pleasurable to use compared to most dSLR models with smaller optical viewfinders in the same conditions.

Bottom Line - The Sony A33 is a bold new camera design with a wide variety of interesting features, including very fast Phase Detect Autofocus that works while shooting still images or video. This is all thanks to Sony's decision to launch a new Single Lens Translucent (SLT) camera design with a full time Live View feed. This Translucent Mirror Design eliminates the blackout time other dSLR model's Phase Detect AF Sensors would have due to due to mirror flipping, offering fast Autofocus Performance with Live View that's far superior to the performance you'd have using Live View with competing cameras.

As with Sony's more traditional dSLR models, the Super Steady Shot stabilization is also appealing to many users, since any lens you use on it (including bright primes and older Minolta Autofocus lenses) will benefit from this technology. In addition, this camera has some really neat features like Hand Held Auto HDR, Sweep Panorama and Multi-Frame Noise Reduction. The A33 would make a great choice for both experienced photographers and first time dSLR users looking for a camera offering performance oriented features and versatility in a smaller package; thanks to full time live view with fast Autofocus, easy to navigate screens for camera settings, combined with great ergonomics and button placement for frequently used settings. With a list price of approximately $599 US for the A33 camera body (or approximately $649 US for a kit with the A33 Body and an 18-55mm zoom lens) this camera should appeal to wide range of photographers, with Sony's new SLT (Single Lens Translucent) System design offering a unique product in an already crowded interchangeable lens market segment.