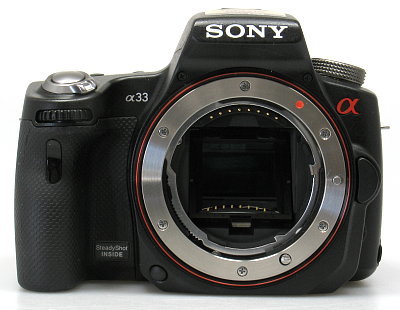 Sony has constructed the A33 using high-impact plastic materials. The outer body shell has a smooth black finish, while the hand-grip and thumb rest are wrapped in a comfortable material that gives you a secure grip on the camera with your right hand.


Here we can see the Sony A series, all metal, lens mount on the A33, which is compatible with a wide variety of lenses. These include all Sony Alpha series, Sony wide-aperture zoom, Sony "G" Series, Carl Zeiss, and a plethora of Minolta A-mount lenses. Sony has a complete list on their site, including two teleconverters that are available as optional accessories for the A33. Sony equipped the A33 with their popular APS-C (23.4mmx15.6mm), 14.2 megapixel Exmor HD CMOS image sensor, which allows the camera to capture beautiful photos in a wide variety of shooting conditions.

The A33 also features Sony's Anti-Dust Technology. Changing lenses allows dust to enter the camera, which could at some point start showing up in your photos or video. To keep the image sensor clean, you will need to occasionally go to cleaning mode. The A33 is equipped with a static-free coating on the low-pass filter to help prevent dust from sticking to the image sensor, and also uses sensor vibration to help remove any remaining particles. Sony note's to make sure the battery is at least at a 50 percent charge before manually initiating the cleaning sequence, which is activated by choosing the "Cleaning Mode" option from the Setup menu (Page 2). By selecting this option the A33 will automatically clean the sensor to the best of its abilities.

The A33 is the first model we've seen to use Sony's new Translucent Mirror Technology (aka TMT). By removing the standard reflex mirror assembly found on just about every single SLR or dSLR ever made, Sony has accomplished several things. First off, they've removed some of the components that were responsible for moving the mirror assembly, along with removing the pentaprism or pentamirror optical viewfinder. By removing these two assemblies, Sony was able to shrink the size of the A33 quite a bit when compared to other APS-C sized dSLRs. Since the OVF has been removed, the A33 features continuous Live View shooting, whether you plan on used the articulating 3.0-inch LCD screen or the eye-level EVF in the eye piece.

Secondly, this new system promises faster AF speeds and burst capabilities thanks to fact that no mirror has to be moved for the camera to acquire focus, then expose the image sensor. This is accomplished due to the use of a fixed translucent mirror, that not only reflects light upwards to the phase detection AF sensor, but also allows light to pass through the mirror to the Exmor HD CMOS image sensor. With this technology in place, Sony claims that the A33 can shoot at up to 7fps at full resolution, along with offering unmatched AF speeds and improved AF tracking performance. These high-speed features are not just for still images either, as this system helps the camera focus better when recording full HD video as well.

Sony equipped the A33 with a built-in, Pre-flash TTL flash unit. It offers Auto pop-up functionality in all exposure modes. The flash guide number is 10 (in meters at ISO 100). It is sufficient for lenses as wide as 18mm, and has a recycling time of approximately 4 seconds. Available flash modes are: Auto, Fill-flash, Rear sync, Slow sync, High Speed sync, and Wireless. Flash output compensation is available in ± 2 EV in 1/3 stop increment. The flash sync speed is up to 1/160 of a second.

ADI flash - Advanced Distance Integration - is available with any Sony or Konica Minolta MAXXUM D-Series lens. By comparing information obtained from the lens, built-in distance encoder with pre-flash metering data, ADI calculates the optimum exposure settings and flash brightness needed to obtain a proper exposure, even if the subject is standing in front of a very dark, light, or reflective background. 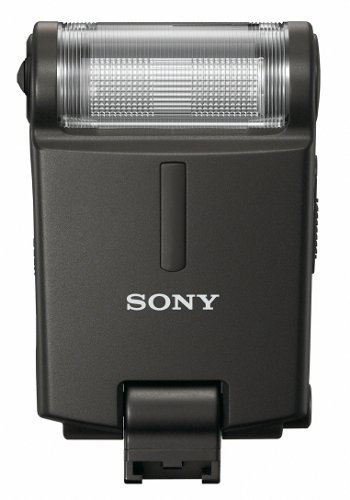 The A33 comes with a built-in flash and a hot shoe port for external flash units such as the new Sony HVL-F20AM (as well as the HVL-F42AM, HVL-F56AM, HVL-F36AM, and Minolta MAXXUM 5600HS and 3600HS), allowing you to take advantage of wireless high-speed and TTL flash, rear-curtain flash synchronization, bounce flash and advanced off-camera setups for pro-level flash shooting. 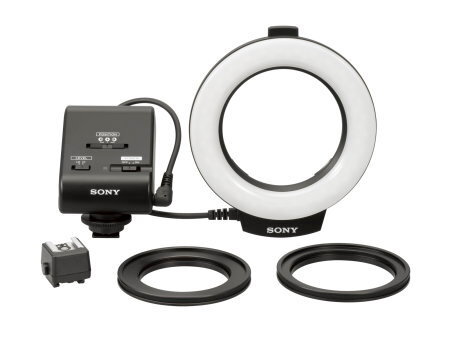 
The A33 uses a 0.46" Xtra Fine Electronic Viewfinder. With 1,440,000 pixels and the field of view approximately 100%, using the viewfinder is better than ever. The viewfinder magnification is 1.10x (with 50mm lens focused on infinity) and has a - 4.0 to + 4.0 m-1 dioptric adjustment. The A33 also has a built-in sensor that detects when you are using the EVF and will turn off the back LCD.

Here you can see a view of inside the "Tru-Finder", electronic viewfinder (aka EVF), showing the 15 focusing points. The active focus point(s) are illuminated so you know exactly which AF zone(s) has been selected. See the graph below for a visual description.

This is the new digital leveling gauge for the A33. This system helps ensure you capture level photographs, giving indicators of both pitch and yaw (horizontal and front to back directions). When the camera is level the indicators will turn green, and the A33 will show a level shot within 1 degree.


The AF/MF switches are conveniently positioned for easy access with your thumb. This allows you to instantly toggle between auto focusing and manual focusing - without interrupting the flow of distance information to the camera's metering, Steady Shot, and ADI flash systems.

Three focusing modes ensure optimum performance in a wide range of situations. There's AF-S mode for single-shot AF, an AF-C mode for continuous AF, and an AF-A mode that automatically switches from single-shot to continuous AF when it detects that your subject is moving.

With 15 separate AF sensors you have great flexibility in how you frame your subject. Below are the three different AF selections that you can choose from, and a graph of the focus indicator icons.

Sony incorporated their advanced 1200 zone evaluative metering system into the A33, which provides optimum exposure control for various lighting conditions. User selectable metering modes include: Multi-segment, Center-weighted or Spot metering. The Metering range is -2 - 17EV at ISO 100 with a f/1.4 lens.