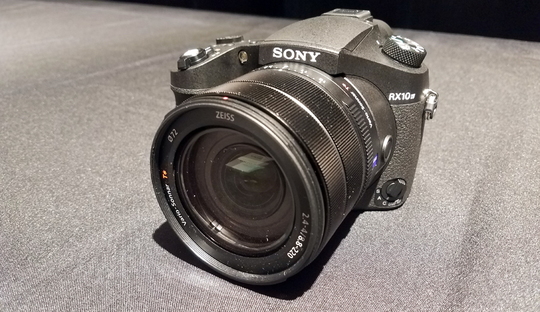 KEY FEATURES
HANDS ON FIRST IMPRESSIONS
Written by Steven Cohen
Geared toward photographers, videographers, and travelers who want to capture fast moving subjects like wildlife or sports on the go, the RX10 IV uses a Fast Hybrid AF system with 315 phase-detection AF points and contrast-detection AF to offer the world's quickest AF acquisition time for a fixed-lens camera of this type.
To show-off the results of this impressive tech, Sony displayed a highlight reel of mostly handheld images shot with the camera, including gorgeous stills of a whale breaching, a bird in flight, a racecar speeding down a course, and a surfer gliding across a wave -- all with their subjects perfectly in focus.
And though I had to settle for snapping a few shots of journalists standing around instead of a majestic bird soaring through the air -- and we weren't even allowed to keep those to share -- my brief time with the RX10 IV did highlight some of the features that should enable similarly impressive pictures in the field.
Panning the camera around while lightly holding down the capture button revealed a series of green AF points dancing across the screen, showing off the unit's focusing tech in action. Snapping a few single pictures and multiple burst fire shots yielded very quick response, especially the impressive 24fps continuous shooting mode (up to 249 shots, technically allowing users to create unique 10-second 20-megapixel video clips). In addition, I could also change the AF window to concentrate on the center of the frame or a wider area. And while I couldn't examine the resulting pictures in great detail (the LCD screen can only show so much), my subjects always looked to be in focus.
Likewise, the camera did a great job of automatically shifting focus from a pen in the foreground to another camera in the background once I removed the pen from the frame -- though I had to manually lift up and then hold down again on the capture button to refocus on the pen if I brought it back into the foreground.
I also sampled the unit's HD video recording mode (4K in 24p and 30p is also possible but the demo unit didn't have the right memory card to support the feature), and the fun HFR (high frame rate) mode for capturing short super slow motion clips. This latter feature allows users to capture 4 to 7-second videos (depending on quality) at 960fps, 480fps, or 240 fps frame rates for 60p, 30p, or 24p playback to create slow motion. For testing purposes, I opted for the most dramatic mode, recording my hand waving around at 960 fps. Though the unit takes a moment to buffer and process the resulting clip and HFR is limited to HD resolutions, the effect is still pretty cool.
Again, my time with the camera was fairly limited and the mundane setting wasn't the most exciting for picture-taking, but the demo definitely left a positive impression and I didn't run into any notable quarks.
PRICING & AVAILABILITY
The Sony Cyber-shot RX10 IV is set to start shipping in October for $1,700.