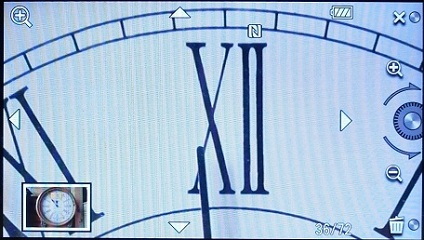 Please excuse the poor quality of these screen captures. The NEX-5T kit does not include an AV output cable, therefore we had to photograph the display screen.
Use the Playback button on the top panel of the NEX-5T to open the Playback function, through which you can view photos that are stored on the camera's memory card. With a still image displayed on the screen, you can see information about the photo.
The main playback screen shows basic data about the image, including the file name, aspect ratio, resolution, and image quality across the top of the image. Along the bottom you'll see the shutter speed used, aperture, ISO, and the date and time the image was shot.
Press the Disp button, which is at the top of the four-way button to change the view to see more details. The image will shrink to occupy the upper left corner of the screen and four histograms will appear on the right side of the screen, showing whether the image was properly exposed inside each color. Across the bottom of the screen, the NEX-5T adds a bit more information, such as the shooting mode, EV setting, focus mode, focal length, special effect, and white balance setting.
Press Disp again to return the image to full screen view and to remove all data.
To make use of the Sony NEX-5T's thumbnail view in Playback mode, press the bottom of the four-way button with a single image displayed on the screen. You then can see multiple photos at one time. Scroll through the thumbnails to find the image you want and press the middle of the four-way button to bring it to the full screen or just touch the image. Touch the bar on the far left to switch between still images and movies displayed on the screen.
The standard thumbnail view is a 4x3 view with 12 images on the screen at a time. To switch to a 3x2 view with six images on the screen (larger thumbnails), you'll have to work through the Playback menu.

You can magnify images in the NEX-5T's Playback mode as well, allowing you to see whether the image's sharpness is exactly what you want. You can drag your fingers across the touch screen in a widening motion to open magnification mode, but I had a difficult time making the touch screen recognize this movement on a consistent basis. You also can press the middle of the four-way button to begin magnification.
Spin the four-way dial clockwise to increase the magnification and counter-clockwise to reduce the magnification. To change the portion of the magnified image that you can view, either press the four edges of the four-way button or touch the triangles on the screen. The small box in the lower left corner shows the full image. Press the upper round button (marked with an "x" on the screen) to end magnification mode and return to full view.

You can view the movies that you've shot with the NEX-5T by using Playback mode too. To see the movies, you'll have to touch the bar in thumbnail view, as discussed earlier, or work through the Playback menu to switch to viewing movie files.
With a single movie on the screen press the middle of the four-way button to start playback. Press the button again to pause the playback. You can spin the four-way button to fast forward and reverse within the video steam.
With a movie displayed on the screen, you'll see the movie mode and resolution displayed across the top of the screen and the date and time the movie was shot on the bottom of the screen. Press Disp to remove this data from the screen.

The Sony NEX-5T's Playback menu is a bit of an organizational nightmare, much like the other menus on the camera. From any shooting mode, just press the Menu button, which usually is the upper round button on the back of the camera. (Look at the label on the screen, as the function of the upper round button will change in some shooting modes.)
You'll then see icons representing seven menu options. Press the Playback icon to open the Playback menu.
The confusion comes in the Still/Movie Select menu option shown above. For some reason, the NEX-5T only will display movies or still images in Playback mode. You cannot view both at the same time. So if you want to see a movie, you have to pick movies from the on-screen menu. You then have to work through the menu again to switch back to still images. This is very confusing at first and time consuming later. The vast majority of cameras just show both movie and still images in the list together.
Some menu options may be grayed out, depending on which view mode you're currently using. The menu options are:
Sony included both Wi-Fi and NFC capabilities with the NEX-5T, and you can use this feature to connect wirelessly to an Android smartphone or tablet using the Sony PlayMemories Mobile App. You then can use the Send to Smartphone menu option to decide which set of images to pass to the mobile device.
You can change the NEX-5T features by adding any some Sony's PlayMemories Camera Apps as well.