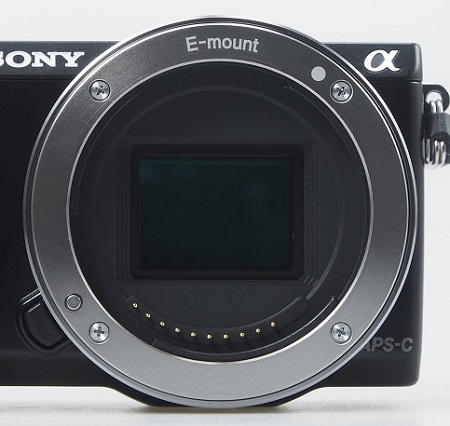 Sony has included an E-mount with the NEX-5T, which makes this ILC model compatible with all Sony E lenses. The manufacturer also offers an adapter that will allow you to make use of Minolta A-mount lenses with this model. Because the camera is pretty small, the lens mount looks over-sized and dominates the camera's front view.
The large image sensor featured in the NEX-5T is an impressive chip, It's an Exmor APS HD CMOS image sensor that measures 23.5 by 15.6 mm and contains 16.1-megapixels of resolution. The NEX-5T performs well in low light thanks in large part to its really nice image sensor.
Sony shipped a 16-50mm kit lens with the NEX-5T. It's a power zoom lens, meaning you use a switch on the side of the lens to advance the zoom motor. Some ILC models have you twist a ring to advance the telephoto setting manually.
Attaching and removing the NEX-5T's interchangeable lenses works in a manner similar to other interchangeable lens cameras. To attach the lens just line up the white dot on the top of the lens (visible in the next photo below) and the white dot on the silver lens mount (visible in the photo at the top of the page). Then twist clockwise about one-quarter turn until the lens clicks into place.
You press the lens mount button to the lower left of the lens (as viewed from the front of the camera) and then twist the lens counter-clockwise to remove the lens.
You'll have both autofocus and manual focus options available with the NEX-5T. Sony has included 99 focus points in phase-detection autofocus and 25 focus points in contrast-detection autofocus. The autofocus modes available are: Single-shot (AF-S), Continuous (AF-C), and Autofocus.
When you want to use manual focus, you must select it from the on-screen Camera menu. There's no switch or button on the camera body to change focus modes. Once in manual focus mode, you simply twist the focus ring, which is near the front end of the lens. (You can see the grooved area of the focus ring in the photo above.) As soon as you begin twisting the focus ring, you'll see a magnified version of the scene appear on the NEX-5T's LCD screen. This magnification makes it easier to create a sharp focus, even if you aren't standing very close to the subject. The initial magnification is 4.8x, but you can press a button the back of the camera to change to 9.6x magnification. This manual focus feature feels very natural and works very well, although it would have been nice to have a switch on the camera to move into manual focus mode.


You can see the power zoom switch on the side of the lens in this photo. You'll operate this switch with your left hand while you're holding the camera.
Just slide the switch toward the T to increase the telephoto setting and toward the W to move back to a wide angle setting. It can be a little difficult to control the telephoto setting precisely using this switch versus a zoom ring that you could twist manually.


Sony included a tiny external flash unit with the NEX-5T. The camera has no built-in flash capability.
To begin using the flash, you'll lift the flash upward until it reaches about a 45 degree angle, as shown here. When you close the flash so that it's flat to the top of the camera, as shown in the photo above, the flash will not fire.


There is no hot shoe included with the NEX-5T, which keeps this camera at a pretty small size. However the lack of a hot shoe does make the process of attaching a flash a little awkward.
To attach the flash you first must open a compartment on the top panel of the camera by lifting a hinged cover, which exposes a terminal port. As shown here, the terminal port looks a little bit like a USB or HDMI port. The bottom of the flash has a connector that slides into the port.
Make sure that you spin the ring near the bottom of the flash unit to lock the flash in place to the camera body. A screw on the bottom of the flash will fit in the screw hole seen above the port in this photo. If you don't lock the flash in place, it's very easy to bump the flash unit loose while you're using the NEX-5T, which could lead to damage for the flash.
You'll find the camera's primary control buttons on the right side of the top panel. The control buttons extend into the right hand grip, which is a perfect size and shape for holding the camera one handed.
At the top of the handgrip is the power ring. Just slide the ring's notch to the right to power on the camera and slide it to the left to power down the camera. Inside the power ring is the shutter button. This is the perfect location for the shutter button, making it very natural to use it with your right index finger.
Press the Fn button to open a customized menu across the bottom of the screen, giving you easy access to the features you use most often. As you use the NEX-5T you're going to appreciate this Fn menu, because the overall menu structure of the NEX-5T is poorly organized, making it very difficult to find the exact feature you want to use. There are 15 different features that you can assign to the six Fn menu slots.
Just below the shutter button is the Playback button, which opens Playback mode. This is a very odd location for the Playback button, which is usually on the back of most cameras, next to the LCD screen.
The Movie button is marked with a red dot, and it's just to the right and below the Playback button. Use this button to start and stop movie recording. Both the Movie and Playback buttons are pretty small and are set into the camera body, which makes it a little difficult to press them. This is especially frustrating with movie recordings, as you may jar the camera a bit when trying to press the movie button, causing the video stream to jump, detracting from the image quality.
Finally there's a selector dial on the far lower right of the top panel, which allows you to scroll through on screen menus or previously shot photos more quickly than pressing the four-way button.
Even though it can be a little difficult to start and stop movie recording with the NEX-5T, you will find a great LCD screen on which to view the movies with this camera. It's a widescreen designed LCD, which is perfect for watching 16:9 ratio HD movies.
The NEX-5T's LCD is an impressive screen, offering 921,600 pixels. It's a touch screen LCD, and the touch screen aspect of the NEX-5T's LCD makes this camera easier to use. It isn't quite as responsive as some other touch screen models I've tested though.
Five brightness settings are available through the on-screen menu, as well as a "sunny weather" option, which makes it pretty easy to see the LCD screen with minimal glare problems when shooting outdoors in sunlight.
The LCD is also articulating. It can swivel upward up to 180 degrees, which works well for shooting a self portrait. Sony had to include an extra hinge in the design to allow the LCD to reach a full 180 degrees, so the manufacturer did a good job here. You also can tilt the screen 90 degrees with the camera attached to the tripod, leaving the screen facing upward, meaning you won't have to stoop or crouch to see the LCD.
With the extra hinge you can pull the screen almost an inch away from the camera, and it then can be tilted downward about 50 degrees, adding to its ability to tilt upward.

With the touch screen LCD you may not need to make use of a lot of the different buttons on the right side of the back of the NEX-5T. The tiny round buttons at the top and bottom of the panel change functions, depending on what is displayed on the LCD screen. Each button is attached to a particular on-screen function.
In the upper right of this area of buttons is a pad where you can rest your right thumb while holding the camera.
The four-way button dominates this area of the camera, and it's a spin ring that makes it easy to scroll through menu options and stored photos. You also can press the edges of the spin ring to make it work like a traditional four-way button.
The Disp button at the top of the four-way button changes the look of the information displayed on the screen in shooting modes and Playback mode. The right side of the four-way button controls the camera's ISO setting. You can change the EV using the bottom of the button. And the left side of the four-way button controls the drive mode and self-timer mode.

The NEX-5T hides its USB and HDMI ports behind a hinged cover on the left side of the camera (as you're holding the camera). The cover snaps into place when you close it.


The battery and memory card slots are behind a spring hinge compartment located on the bottom of the camera. Both items are stored inside the right hand grip. The compartment locks in place with a toggle switch.
The rechargeable battery is pretty thick for such a small camera, and the NEX-5T has a good battery lifespan. Sony did a good job designing this camera, as the battery occupies much of the interior of the right hand grip.
You must charge the NEX-5T by plugging the included USB cable into the camera and then into the electrical adapter. No separate battery charger is included.
I like that the battery charge icon on the camera screen measures the exact amount of battery charge remaining down to 1 percent increments, which gives you much more information about how much battery life is remaining than most cameras do. I didn't like that when you plug the camera into the adapter to charge it, there's no light or other indicator that the camera is charging. You have to turn on the camera to see an indicator that the cables are tightly connected and the battery charge is occurring.