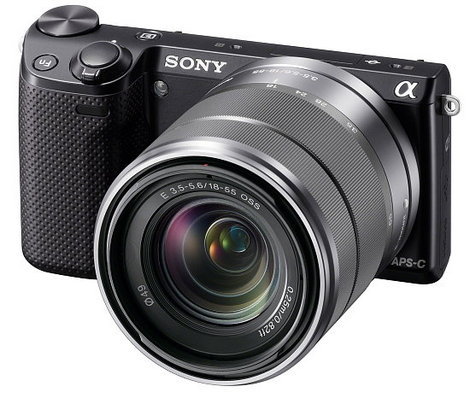 Sony continues to add powerful new models to their NEX line of mirrorless interchangeable lens cameras, and for the fall of 2012 they've added the NEX-5R. This unit builds off of the NEX-5N that was released in late 2011, with some impressive improvements. First off the camera has received a newly developed 16.1-megapixel, APS-C sized Exmor HD CMOS image sensor and BIONZ processing unit, which help the 5R offer improved performance and image quality over past models. Next they added a new Fast Hybrid AF system, which uses both Contrast AF along with Phase detection AF that' built into the image sensor itself. This new system boasts the combination of 99-point Phase AF with 25-area contrast detection, which work hand in hand to achieve robust AF performance in various shooting situations. This new system also allows the 5R to offer up to 10fps burst shooting with continuous AF and AF tracking - a first for Sony.

These are not the only spotlight features found on the 5R. This is also Sony's first interchangeable lens camera to offer built-in Wi-Fi, thanks to the inclusion of an 802.11 B/G radio that allows you to connect to any Wi-Fi network so you can easily upload photos to Facebook, etc. What's more is that the NEX-5R is also the first model in Sony's line-up to offer their new PlayMemories Camera and Mobile App service, which allows you to expand the 5R's abilities with various Apps that can be downloaded to the camera. They even offer Apps that work with your iOS or Android powered smart phone or tablet, which allow you to sync the 5R for photo sharing and remote control. You can get a live view from the 5R right on your smart phone or tablet, then snap away or browse your stored files. This opens a whole new world of possibilities with this camera, and we're very excited to see how well this option works. Currently, there are only about a handful of Apps that will be available, however Sony plans to expand these in the near future. Some of the apps will be free, while others will have to be purchased - pricing is not yet known. Apps launched with the 5R include Picture Effect+, Milti Frame NR, Photo Retouch, Braket Pro, Direct Upload, and Smart Remote Control.

Next they've updated the camera's GUI and control interface with some new touch features like Touch AF and Touch AF tracking, along with a handy new control dial and function button. The LCD has also seen some upgrades, and it can now tilt up 180degrees or down 50 degrees. By tilting it upward all the way, the display will now face forward, allowing you to easily capture self-portraits with your friends, or show your subjects the photo you just snapped of them.

There's a lot to like about the new NEX-5R. Stay tuned as we update this page once we have more details, and get our hands on a 5R for review.