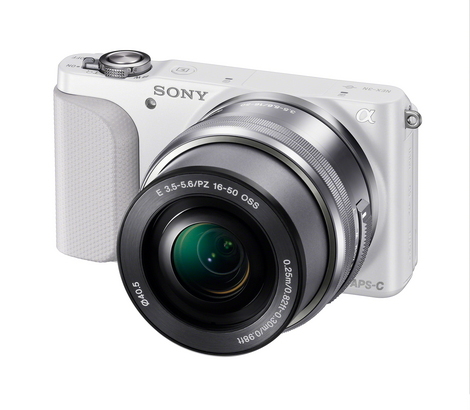 During the winter of 2013, Sony announced their smallest NEX model yet, with the introduction of the NEX-3N. The world's smallest interchangeable lens camera to offer an APS-C sized image sensor (as of 2/2013), the NEX-3N shares similar specs to their NEX-F3, with a few "enhancements".

First of all, it's smaller and lighter. Next, they've squeezed a few more shots per charge out of the battery (480 vs. 470), added a new zoom lever mounted around the shutter release (for use with their newer 16-50mm motorized zoom lens), introduced their new Auto Object Framing technology (more on that below), implemented an updated BIONZ processor, swapped in a HDMI Type D port, and incorporated their new area-specific noise reduction technology. While all this sounds good, you won't be too happy to hear that the frame rate of burst mode has dropped to 4fps (versus the NEX-F3's 5.5fps).

The new Auto Object Framing technology is pretty slick. We all try to get framing just right, however we don't always get the look we wanted; that professionally framed look. This new process helps with that by letting the camera alter the framing after you've captured the shot; all automatically. When enabled, the camera will analyze the scene you've captured (whether it's a portrait, landscape, or macro shot), then automatically trim the image to give you a more "professionally-styled composition". The cropped photo is when bumped up to max. resolution using Sony's "By Pixel Super Resolution" technology (fancy for interpolation).

The Sony NEX-3N comes in kit form with the 16-50mm (SELP1650) motorized zoom lens. Pricing is just $499 USD. You can choose from Black or White. To see the most current online pricing, click on the Buy button at the top of bottom of this page.