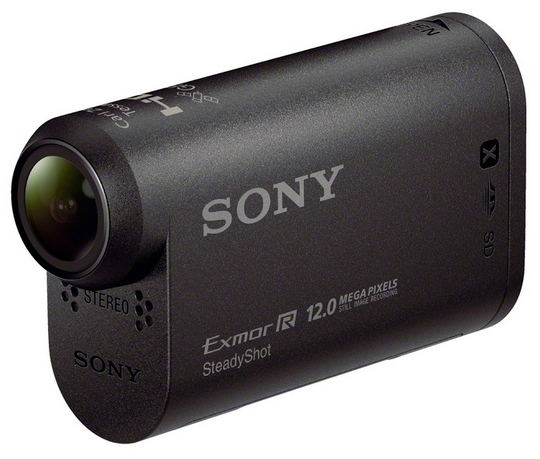 Sony has announced a new HD "action cam", the HDR-AS30V. With an included waterproof housing that is 35% lighter and 25% smaller than the previous generation, the AS30V boasts Full HD Video Recording as well as 11.9-megapixel Exmor R CMOS image sensor for still photos and time-lapse photography. GPS, Wi-Fi, SteadyShot image stabilization, a 170-degree field of view, and an HDMI output are all standard.
Much like their newly announced QX-series, the AS30V's built-in WiFi works work with the free PlayMemories Mobile app (available for iOS and Android). This app allows owners to transfer video and stills to smartphone and tablets, or set up a remote display. If you own an NFC-compatible smartphone, such as Sony's Xperia series, you can set up NFC One Touch Remote control. With the PlayMemories Home app, you can edit files AS30V footage on a PC or Mac and then share it on Facebook and other social networking sites. Or, try overlaying GPS-recorded info (like your extreme speeds!) via Multi View and Map View.
The AS30V features a number of different video resolutions, up to 1920x1080/60p and includes two 1280x720p slow motion modes. The camera's fixed lens remains at a panoramic 170-degree field of view, but closes to 120-degrees when SteadyShot image stabilization is activated.
Sony HDR-AS30V Action Cam Features
Sony's HDR-AS30V Action Cam will be available in late September (2013) with an MSRP of $299.99. The current HDR-AS15 model's price will drop to $199.99.
Additional Product Views