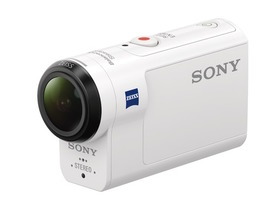 Identical to the recently reviewed FDR-X3000, the Sony HDR-AS300 is exactly the same camera except for its recording capabilities. It shares the same body and controls, and like the X3000, the AS300 is led by its powerful features.

Sporting a EXMOR R CMOS imaging sensor, BIONZ X image processor, Optical SteadShot, GPS and built-in WiFi; it is one of the most advanced action cameras on the market. The one difference with this camera compared to the X3000 is this camera does not record 4K video. Topping out with Full 1080p HD video at up to 60fps and 720p HD video at up to 120fps, the AS300 is still very powerful and great for shooting high-quality full HD video; along with some slow-motion action. Add to it some of the great accessories offered by Sony, and this camera is ready for any shooting situation, above or below the water.
The AS300 features a very simple layout and body controls that allow you to easily adjust your settings while you are on the go. With just a power, record, menu and two arrow buttons; there is nothing confusing at all about working the camera. A small black & white LCD screen shows your current settings, so there is no guessing as to what you have set and no reason to connect the camera to a computer to make changes.
An optional Live View Monitor connects to the camera via the built-in WiFi in the camera. This allows you to see a smooth, accurate composition of what the camera will capture. This is great for setting up the camera before you start recording. Every aspect of the camera can be adjusted via the LVM, even powering the camera itself on and off. A streaming view is sent from the camera to monitor whether you are recording or not, which actually allows you to see the action as it happens. While using the camera and LVM, we did go through times where they would lose connection and we would have to wait for them to connect again. This happened with the camera and LVM next to each other as well as up to 25 yards away.
Besides the Live View monitor, the Sony line of action cams feature an outstanding selection of accessories including an underwater housing, multiple mounts, grips, and harnesses that allow you to use the camera in just about any way you can come up with. The underwater housing is a very important accessory as it provides the camera with its waterproofing (60M), dust and shock protection that keep the camera safe and operating in extreme conditions.
While the AS300 was not designed for still image capture, it is a feature that is available if needed. The 8-Megapixel sensor captures a different sized image, based on the zoom setting that you have selected. Our sample images show a good deal of noise and lack of detail, producing an image of lower quality than most current smartphones. Samples can be seen on our samples page that also show the three lens/zoom settings of the camera.
While the still images lack, the videos produced by the AS300 are much better. It captures a fantastic Full HD video that is sharp and plays back flawlessly on all media sources we tested. Sony's SteadyShot optical image stabilization adds an whole new dimension to action camera videography by allowing the capture of smooth video while you and the camera are on the move. It provides a great tool for any creative camera movements as well and could replace some expensive video equipment for amateur videographers. The camera offers Full HD at up to 60pfs and 720p at 120fps. Audio is recorded with a built-in microphone, but the camera does have an audio input for outside sources (when not in the waterproof housing).
Powering the AS300 is Sony's NP-BX1; a 3.6V, 1240mAh rechargeable Li-Ion battery. While completing our tests, we used the GPS and WiFi the entire time, and only needed to recharge once. Sony claims that this battery is enough for the camera to capture up to 125 minutes of Full HD capture with the WiFi or 135 minutes without. The battery charges inside the camera with an included USB cable, but for the adventurous type, you will want to have a few spare batteries and a charger or two. These are all available from Sony and will keep you shooting as long as you can handle your adventure.
Bottom Line - The Sony HDR-AS300 is a fantastic Action Camera that provides outstanding Full HD video thanks to the EXMOR R sensor, BIONZ X processor and SteadyShot IS. WiFi and GPS, combined with a fantastic set of accessories will allow the camera to work in any situation you may find yourself in. The only drawback is the lack of 4K video, which is available on the identical FDR-X3000 for just a slightly higher price tag. With a MSRP of US $249.99, it comes in at $100 less than the X3000. A great deal, but how long will you be OK with not having the option of 4K video capture?