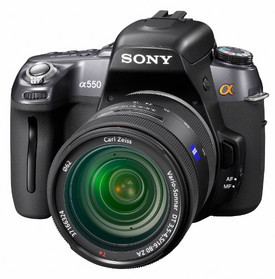 The Sony A550 is a very interesting dSLR model offering a new 14.2MP CMOS Sensor with an array of nice features, including a Live View system with class leading Autofocus speed (which now includes the option to use Face Recognition with Live View), Anti-Dust technology, a 9 Point Autofocus Sensor array with Eye Start, a 40 Segment Metering System using the Optical Viewfinder (with a 1200 zone evaluative metering system when using Live View), a 3" high resolution (approx. 922,00 pixels) tilting LCD Screen, an ISO 200-12800 sensitivity range, with RAW and JPEG image capture using a variety of settings combinations for fine tuning of the camera's output.

The Sony A550 offers a fast frame rate for a camera in it's market niche, with up to 5fps burst speed including Autofocus, or a special 7fps "Speed Priority" burst mode without Autofocus between frames (which could prove useful if a subject is not changing distances from the camera significantly during bursts). The A550 also allows you to use any Sony Alpha or Minolta Autofocus mount lens (including 20+ year old lenses from Minolta that were designed for the Minolta Maxxum and Dynax film cameras). As with all other Sony dSLR models, any lens you use on the A550 is stabilized, thanks to the built in SSS (Super Steady Shot) image stabilization system, reducing camera shake to allow slower shutter speed photos that would normally not be possible without using a tripod. The viewfinder also displays a Super Steady Shot bar graph (so you can tell how hard the stabilization system is working to combat your camera shake), making it easier to predict the results you'll get for the conditions you're shooting in if you can't use a tripod.

In addition, the A550 offers some very interesting HDR (High Dynamic Range) features, including an Auto HDR feature that lets you take two photos (one photo exposed for the shadows, and another photo exposed for the highlights), combining them into a single image in camera, even when using the camera without a tripod (as the image processing is designed to account for minor framing differences between the images being combined). It also offers multiple choices for single shot Dynamic Range Enhancement (allowing a user to select from 5 different levels plus Auto).

For greater versatility that could appeal to point and shoot users upgrading to a dSLR, the Sony A550 offers dual card slots. This feature allows a user to load SDHC and/or MS Pro Duo media, then change between them with a simple flick of a switch. The A550 uses a rechargeable Lithium Ion battery and has a CIPA rating of 950 shots before a recharge is needed. We did not observe a low battery indication in a single shooting session while using this camera. One thing the A550 is missing is the ability to record video (something we're starting to see on more and more dSLR models). But, so far, Sony is not including video capture in it's current dSLR lineup, despite the best Live View implementation on the market in a dSLR (much faster Autofocus compared to it's competitors when using Live View).

The size of the A550 is very appealing, offering more grip surface compared to the entry level Sony dSLR models like the A330 and A380, which I thought made the A550 easier to hold and use for longer periods of time, with a comfortable weight of approximately 21.1 ounces before adding the lens and battery. It's penta-mirror optical viewfinder is an improvement over the A330 and A380, offering a larger and brighter view. The A550's high resolution tilting LCD is also quite nice, especially when using Live View for waist level type shooting or shooting with a tripod. I found that the LCD display remained quite usable in most conditions, only starting to get grainy in very low light levels.

Note that you only have around 90% frame coverage when using fast Autofocus Live View, since the dedicated Live View sensor is located in the viewfinder housing. That allows a bit of room for cropping. But, you can change to what Sony calls Manual Focus Live View and get full frame coverage using the camera's main imaging sensor for close-up work if you require more accurate framing and can also magnify the view by 7x or 14x for greater manual focus accuracy. One thing I did notice was that the A550 did not have a standard video connection. Instead this Sony model offers a mini-HDMI port. That's great if you have a newer display or HDTV with an HDMI input. But, the lack of a standard video output could may be limiting if you are still using an older TV or display with a composite/RCA type input. Also note that the HDMI cable was not included (it's sold separately).

The A550's performance is quite robust, with power on to first shot running around 5/10 of a second. Shutter lag, the time delay between depressing the shutter and capturing an image was approximately 1/10 of a second when prefocused; with Autofocus Shutter lag running approximately 2/10 to 3/10 of second when using a Sony 18-55mm f/3.5-5.6 DT SAM lens with either the Optical Viewfinder or Live View. Shot to shot times using Single Shot drive mode ran less than 1 second without flash, or 1 to 2 seconds with flash (depending on subject distance), using either Live View or the Optical Viewfinder. Shooting JPEG Fine versus Extra Fine with Drive Mode set to Continuous High, I was able to capture 150 images in 30 seconds (5fps) without any indication of a slowdown when using the Optical Viewfinder or Live View with Autofocus set to AF-S (Single Shot AF). Switching to Speed Priority mode, I was able to take 21 photos in 3 seconds (7fps) before the camera slowed down to around 5.3 fps, capturing 160 images in 30 seconds using a Sandisk 8GB Pro-HG Duo (30MB/Second) Card.

Switching to the optical viewfinder with focus mode set to AF-C (Continuous Autofocus), and Drive Mode set to Continuous High, the camera slowed down slightly, capturing 140 images in 30 seconds (approximately 4.7fps, slightly slower than advertised, probably due to the focus system's predicative AF algorithms when using AF-C). We also noticed this behavior in real world shooting of rapidly moving subjects, although the difference from the advertised speed is not much to complain about, as the A550 is already very fast compared to other cameras in it's market niche. When using Live View with Continuous Autofocus (AF-C), the frame rate dropped a little more. But, despite the use of Live View with AF-C, the A550 was still able to capture 102 frames in 30 seconds in our test conditions (working out to 3.4fps, which is much faster than other dSLR models when using Live view).

As for shooting control, the A550 has a wide range of options available, including Manual Exposure, Programmed AE, Shutter Priority, Aperture Priority; and a variety of Scene Modes including Portrait, Landscape, Macro, Sports, Sunset and Night Portrait. The control layout of the A550 made it easy to change modes with confidence, with dedicated buttons for frequently used features like Dynamic Range Optimization Mode, ISO speed, and Drive Mode. It's Fn (Function) key allowed rapid access to most other features. Anyone accustomed to another Sony dSLR should have no problem picking up an A550 and enjoying it after a short amount of time to become familiar with it's controls and menus, while the A550's beginner friendly screens make it easy for first time dSLR owners to appreciate this camera, too.

The Sony A550 also offers a wide variety of Creative Styles, and even has the ability to store multiple Custom White Balance settings (in addition to the numerous presets available for different conditions like Tungsten, Sunny, Flash, Shade, Cloudy and a manual color temperature). All white balance presets are individually tunable with blue/amber compensation. As with most other dSLR models in this price range, you can also switch between Metering Options including Spot, Center Weighted and Multi-Segment (Matrix).

The A550's focus system worked nicely, easily tracking moving subjects, performing better than expected. The only minor complaint was that the frame rate was not quite as fast as advertised when using Continuous Autofocus (the camera slows down just a bit when shooting rapidly moving subjects, apparently to help insure greater accuracy). Overall, we found that it was a fast and reliable system, giving a high percentage of in focus images in tougher conditions.

Image quality at lower ISO speed settings was very good, even using the standard default settings. Fine grained noise is noticeable in shadow areas at ISO 800, but it's still quite low and comparable to other cameras in it's class. Thanks in part to the high resolution APS-C size 14.2MP CMOS sensor, the impact of noise in images is negligible at print or viewing sizes most owners would use. High ISO NR (Noise Reduction) kicks in at ISO speeds over ISO 800, and can be set to Normal or High, allowing a user to achieve a better balance between detail and noise. We were very pleased with the results at higher ISO speeds at typical print and viewing sizes, including 8x10" prints, and found this system to work quite well, with lower noise levels than we've seen from previous Sony models at the same ISO speed settings. Users wanting larger than 8x10" print sizes when using ISO 3200+ may prefer leaving high ISO NR set to Normal and shooting in RAW for even better control using software based tools later. Note that we'd have preferred that Sony included a Noise Reduction Off Setting for even more flexibility (versus the Normal or High settings currently available with the A550).

Bottom Line - The Sony A550 is a camera with a wide variety of interesting features, including very fast Autofocus when using Live View (something you don't find with competing dSLR models), and a unique Hand Held Auto HDR mode. Yet, the A550 still offers a number of features that appeal to first time dSLR owners, too (including a variety of scene modes, and easy to navigate screens for other camera settings). We only had a smaller number of complaints, and found that the A550 was a lot of fun to use with it's pleasing ergonomics, easy to understand control layout, and performance oriented features, making it a great choice in it's market niche for virtually any type of still photography. With a current street price of only $949, we can easily recommend this camera to dSLR owners looking for a unique product in this already crowded dSLR segment. Make sure to compare the A550 with our review of the lower priced A500. Is the A550 worth around $200 more compared to the lower priced A500? If you're looking for a model to use in tougher conditions with the best possible results in mind, in our opinion, yes. It's higher resolution CMOS sensor (14.2 Megapixels versus the A500's 12.3 Megapixel CMOS Sensor) with virtually no difference in noise levels at a given ISO speed, higher quality LCD with 922k pixels (compared to the A500's 230k), combined with a faster frame rate in tough conditions (with a larger buffer size for more photos in continuous mode without any performance degradation) makes the A550 stand out as a class leading camera.