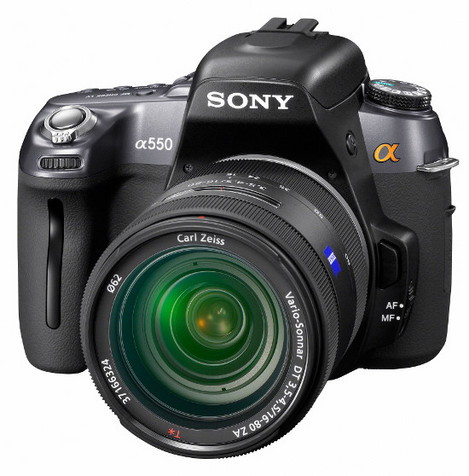 The Sony DSLR A550 is Sony's second model we've seen to hold a spot in their mid-level dSLR line of cameras. The A550 and A500 are very similar in features, with the A550 offering increased resolution at 14.2 Megapixles of resolution, and 921,600 pixels packed into the 3-inch tilting LCD, along with the A550's increased burst ratings up to 7fps. This model also has the new Exmor CMOS imaging sensor and Sony's fast BIONZ image processor to improve the ease of shooting and get clearer images.

Below you will find the original Sony Press release.

CAPTURE THE MOMENT IN PERFECT DETAIL

Image stabilization helps take blur-free shots by compensating for camera shake. Typical DSLR systems build image stabilization into selected lenses only. SteadyShot INSIDE™ image stabilization is built into the camera body itself. Blur will also be reduced with every A-mount lens, including macro and wide aperture standard zoom lenses, with an effect equivalent to shutter speeds faster by 2.5 to 4 stops