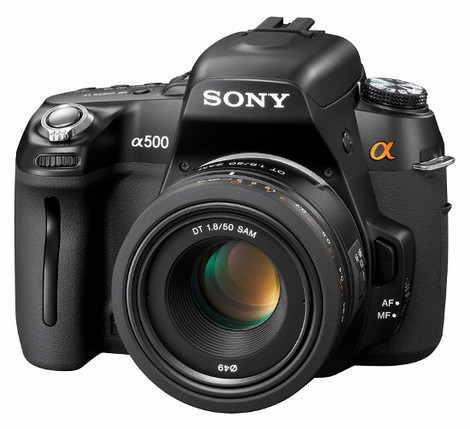 Sony starts off their line-up of new DSLR cameras with the Alpha-500. the a500 boasts Sony's new 12.3-megapixel Exmor CMOS sensor and the BIONZ image processor to improve the ease of shooting and get clearer images. Also new to the Sony DSLR line is the in-camera High Dynamic Range feature. This option will help bring out details commonly lost in shadows and evens out backlit subjects. Sony has also improved their Live View by using two sensors to maintain focus speed. The Quick AF Live view has been developed with Face Detection technology, and is the worlds first face detection system to work with fast, high-precision "phase detection" auto focus. Smile Shutter technology debuts for the first time in a dSLR in the a500 as well. Just like with Cyber-Shot models, Smile Shutter will take a picture when it detects that your subject is smiling. The a500 uses the Memory Stick Pro Duo, SD and SDHC memory cards and is also compatible with Son's new 32GB Memory Stick PRO-Duo HX card.

Below you will find the original Sony press release:

Image stabilization helps take blur-free shots by compensating for camera shake. Typical DSLR systems build image stabilization into selected lenses only. SteadyShot INSIDE™ image stabilization is built into the camera body itself. Blur will also be reduced with every A-mount lens, including macro and wide aperture standard zoom lenses, with an effect equivalent to shutter speeds faster by 2.5 to 4 stops.