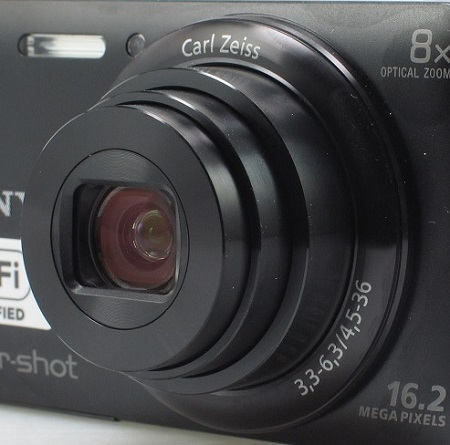 The Cyber-shot WX80 makes use of a 1/2.3-inch CMOS image sensor that offers 16.2-megapixels of resolution. That's a pretty small image sensor, which makes it difficult to create large prints that are pin sharp with this camera. However, the 1/2.3-inch image sensor is a typical size for point-n-shoot cameras.
With such a thin and lightweight camera, you'd expect a limited optical zoom range, but the Sony Cyber-shot WX80 offers an 8x lens that covers a 35mm equivalent of 25 - 200mm. This camera measures only 0.91 inches in thickness and it's only 2.25 inches in height, so it's one of the smaller units currently on the market.
When you turn on the camera, the lens extends out a bit, causing the camera to measure about 1.75 inches in thickness. When you fully extend the optical zoom to 8x, the camera measures about 2.75 inches in thickness. The WX80 moves through its full zoom very quickly, requiring only about a second. The zoom lens doesn't pause enough before it moves into digital zoom, though, which is disappointing.
The lens retracts completely inside the camera when the unit is powered down, and a cover automatically slides into place to protect the glass when you turn off the WX80.
Focus Range:
This Sony camera makes use of an aperture range of f/3.3 to f/8.0 (wide angle to telephoto).

For a very small flash unit, the WX80's flash works well, allowing use over a distance of about 0.67 feet to 13.75 feet at wide angle lens settings. However when you're shooting at the maximum optical zoom measurement, you'll find that the flash range is very limited, only about 5 feet to 7.25 feet. You can extend the flash's range a bit more by shooting at ISO 3200, however you will see quite a bit more noise in these photos.
On this tiny camera, you really have to watch the middle finger of your right hand to be certain you're not blocking the flash as you hold and use the camera. The Cyber-shot WX80's flash modes are: Auto, Flash On, Slow Synchro, Flash Off, and Advanced Flash.
The buttons on the top panel of the Cyber-shot WX80 are pretty basic. Like most of the buttons on this tiny camera, the WX80's On/Off button is really small. It's also recessed to the camera body, which can make it a little tough to press if you're in a hurry.
The shutter button on this camera is a good size and includes a zoom ring, which is in a good location for easy use.
Although the WX80's LCD screen is of a size that looks appropriate with this camera, the LCD only measures 2.7 inches diagonally, which is smaller than the average size of camera LCD screens currently on the market. This model's LCD screen has about average sharpness and brightness. Glare can be a bit of a problem when shooting in sunlight with this camera, but you can select from the brightest of five levels to combat the glare.

Sony squeezed quite a few buttons on the right side of the back panel of the WX80, and all of the buttons have to be very small to fit in this tiny area. The icon marking the flash function on the four-way button is actually printed on the right side of the camera because there isn't quite enough room on the back panel.
At the top of the panel is the movie button on the far right. You can press this button to start and stop movie recording.
To the left is the mode toggle switch. Push the switch to the top to shoot still photos, place the switch in the middle for panoramic photos, and press the switch to the bottom for movies.
The four-way button is in the middle of the control area. You can spin the ring to make selections on the menus or press the edges of the four-way button. You control the look of the WX80's display with the top of the four-way button, the flash with the right side, the self-timer with the bottom, and the burst mode with the left side. In the middle is a small round button to select a menu command or to turn on the tracking focus. Some cameras allow this button to open a popup menu, but the WX80 doesn't offer that functionality.
Along the bottom of the control area is the Menu button, the Help/Delete button, and the Playback mode button (in silver).

On the top of the right panel is a flexible hinged cover for the USB port. You must use this port to charge the battery inside the camera or to connect the WX80 to a computer to download photos.

Sony placed the WX80's HDMI port for downloading HD movies on the bottom panel of the camera. Because it has no cover, you'll want to be careful that stray objects don't end up inside this port. A HDMI cable is not supplied, so you'll have to purchase that separately.

Sony designed the Cyber-shot WX80 with a very thin battery, allowing this camera to remain small and lightweight. Sony doesn't give an estimate of the number of photos you can shoot with a full battery charge, but my tests showed between 200 and 300 shots per charge, which is pretty good performance for a thin battery. Using the built-in Wi-Fi quite a bit will drain the battery more quickly, though.

Unfortunately Sony chose not to include a separate battery charger with the WX80, which means you must charge the battery inside the camera.
The WX80 makes use of either SD style or MS Duo style memory cards. The memory card slot and the battery slot are both hidden behind a hard plastic compartment door on the bottom panel of the camera that includes a locking switch.