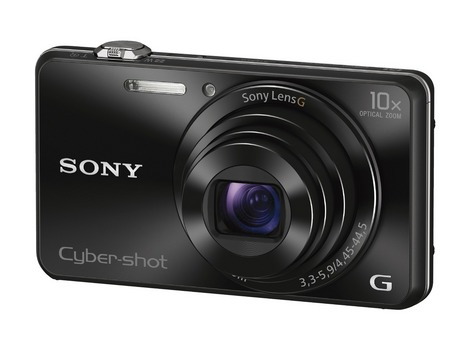 While debuting two new Cyber-shot cameras and a new action cam, Sony announced the new budget friendly, pocket-sized DSC-WX220. For around $200 (MSRP), Sony delivers an 18.2-megapixel Exmor R CMOS image sensor mated to a 10x optical zoom G lens and the very same BIONZ X image processor that's been boosting performance on much more expensive Sony digicams. The WX220 is capable of recording Full 1080/60p HD videos and, thanks to Steady Shot images stabilization, you'll be able to capture shake-free video even when at full telephoto. High Speed AF (Auto Focus) is also included to help grab sharp images even when objects are fast moving (like sporting events). Finally, like many 2014 models, the WX220 includes built-in Wi-Fi that, when combined with a free app on a compatible iOS or Android smartphone or tablet, allows users to back up, transfer, or instantly share files on the web.
We'll have to reserve ultimate judgement until we can review in person, but if Sony delivers on promised performance and features, the WX220 is going to be The Afordable Point-and-Shoot to beat this holiday season.
Sony Cyber-shot DSC-WX220 Features
The Sony Cyber-shot DSC-WX220 will be available in, in black or gold, this August (2014) for about $200.
Additional Product View