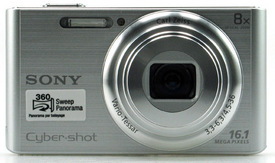 The Sony Cyber-shot DSC-W730 is small and slim, at less than an inch thick, which makes it very portable and unobtrusive in a pocket. It's a bargain camera that is best suited for beginners, both because of its limited features and its lackluster performance. The primary specs are basic, from an 8X zoom to a tiny flash and middling resolution LCD (230,000 dots). Armed with a 16-megapixel sensor, I would have expected better image quality. And, with high light sensitivity up to ISO 3200, I would've hoped for quite a bit less digital noise in my low-light shots.

The target audience of this camera is reflected in the button choices on the back panel. One of the positions on the four-way control has a happy face icon; it is used to launch the smile shutter function; which trips the shutter when a smile is detected in the frame. This feature has three settings from small to big smile, and will provide some fun for small kids (I almost broke my face trying to make a smile big enough to trip the shutter). Also, the sliding switch that alternates between still image and movie recording has a middle position for recording panoramas. Unfortunately, my panoramas (which are recorded by panning the camera, not taking separate still images) looked noticeably blurrier than my other still images. There is also a help button that launches the in-camera guide (it doubles as the trash button in playback mode). The helpful tips are well organized into six categories, such as icon guide, troubleshooting, and key word search. In addition, selecting History will pull up your six most recent visits to the guide.

In playback mode there are only two editing options. Unsharp mask actually sharpens details, though I found this effect to be barely noticeable, even with my photo blown up to 100 percent on a large screen. Beauty Effect is the only one offering adjustable parameters, and only applies to portraits: skin tone, skin smoothing, shine removal, eye widening and teeth whitening are the available settings. Using the four shades of skin tone offered, you can adjust your skin tone slightly, or go from fair to a spray-on tan. By the time you get done distorting your eye size and smoothing out your wrinkles, you'll look like a mannequin, but it may be possible to use these tweaks subtly for an appealing effect.

The best results I got from the camera were close-ups of small subjects, like flowers. Here, the camera performed well and recorded quite a few attractive shots. But it was less impressive in other areas. For example, even daylight landscapes were less than stellar: at the edges, the lens distorts at wide angle. This is evident in image DSC00093 on the Samples page - notice that the people in the distance at the right side of the frame (and everything else) is distorted compared to objects in the middle of the frame. This may not be the end of the world for distant subjects, but notice that the soccer ball in the foreground of image DSC00082 on the Samples page is also very noticeably distorted. At the edges, you lose detail and the results are optically skewed.

The lens also showed limitations within its modest 8X zoom range. If you compare the three-image series on the Samples page, DSC00093-95, you will see a noticeable drop-off in image detail from wide-angle to mid-zoom to full zoom. These images were taken in full daylight, with the camera choosing ISO 100 in iAuto mode. Namely, the limitation here seems to be optics and can not be chalked up to digital distortions due to low light.

In low light, the camera was particularly challenged. Digital noise became evident in my shots as low as ISO 400. By ISO 800 the artifacts become a little distracting, and definitely are obtrusive at ISO 1600. The jump up to ISO 3200 is big, and I considered these shots simply unusable.

This poor performance with higher ISO settings seems to play a part in why I got some blurry shots even in daylight conditions. The camera seems to prioritize using a low ISO setting, but this means the camera will not be able to capture a properly exposed shot without using a correspondingly slow shutter speed. The result, in a number of my shots of small children, was blurriness. There is no children scene mode, though there is a Pet scene mode, which likely does something similar in optimizing for a faster shutter speed to compensate for sudden, unexpected movement.

This could also be a result of a less-than-totally-reliable autofocus. I sometimes found the autofocus to be a little iffy. It sometimes was a little slow to lock onto my subject. In particular, it seems unable to lock onto the edges of clouds and a blue sky (to get a sharp shot, I had to include some foreground trees for it to recognize). Most irritatingly, it falls out of focus at wide-angle after zooming during movie recording. This happened multiple times, and you can see it in action in the movie file on the Samples page. On the plus side, the zoom does operate smoothly during movie recording, and although the sound of the motor can be heard on the audio, it is not nearly as loud as some other cameras and I did not find it overly distracting. The camera records 720p high-definition video, and it often looks quite good, though sometimes the video looked slightly soft due to inaccurate autofocus, and not just at wide angle after zooming.

Speaking of zoom, Sony touts the inclusion of its Smart Zoom technology, which theoretically allows you to zoom up to 32X without image degradation - as long as you are shooting at a lower resolution that the full 16MP. There's been debate about whether this feature is a genuine technological leap forward or just a marketing ploy, and it's been explained six ways to Sunday. But the bottom line for me was that when I compared 5MP shots zoomed in to 32X using the Smart Zoom feature to full-resolution 16MP shots at 8X optical zoom, the difference was noticeable. Fine details dissolved into digital noise and bit-mapped artifacts when using Smart Zoom, making the shot less attractive than my full-resolution images cropped to the same detail. I remain unconvinced, and would rather shoot at full resolution.

Attempts to capture fast action were for naught with this camera. It offers just one burst mode, and it creeps along at a paltry one frame per second. There is no high-speed burst mode and you can not use the flash when shooting continuously.

Regarding scene modes, this camera offers a basic few. There are 11 of them, most of which are typical and self-explanatory. However, what many cameras call Portrait, Sony has renamed Soft Skin (apparently, photos of people with rough-looking skin always have to be retouched). The next scene mode, Soft Snap, creates a shallow depth of field to help focus attention on the main subject, which is a nice effect.

The camera also offers a few effects in record mode: toy camera, pop color, partial color, and soft high-key. You won't find the more over-the-top effects found on some other cameras, such as sketch or watercolor. However, these are arguably the most useful effects in this artsy category. The toy camera effect allows you to choose one of five color hues, including cool and warm, which is more than many other cameras offer (usually just the toy camera effect without any color adjustment). The partial color effect allows you to select a color to remain in the image while the rest of the shot reverts to grayscale. You can choose red, green, blue or yellow, but these are set selections (you can not choose a custom color within the frame).

All in all, this bargain camera is best suited for casual daytime snapshots. But even casual shooters might expect a bit more from the built-in flash. Granted, the flash is small, and it has a modest raiding of less than 10 feet with the lens at wide angle. However, you might run into some disappointment even with these modest expectations. In some of my shots, I noticed a steep drop-off in illumination around 5 or 6 feet. This is unlikely to matter if everyone is in a straight line, equally distant from the camera. But if you have a group of people at various distances, you may find some of them left somewhat in the dark.

The poor battery life on this camera is likely to leave the shooter in the dark as well. On my first battery charge, I only captured 110 shots and 20 short videos. This could have been less than a full charge (straight out of the box). However, I had used the standard display resolution setting (which may save battery power). So, for my next charge I changed the LCD resolution to high (which the manual warns may drain the battery faster), and the camera lasted a mere 89 shots before going dead.

Bottom line - This camera is best suited for bargain hunters who are more obsessed with artificially smooth skin than high image quality or fast performance. The features are expectedly basic, but lots of digital noise at high ISO settings, unreliable autofocus, and very slow burst mode make the camera less than ideal for even some casual snap-shooter. Low battery life and a weak flash don't sweeten the deal.