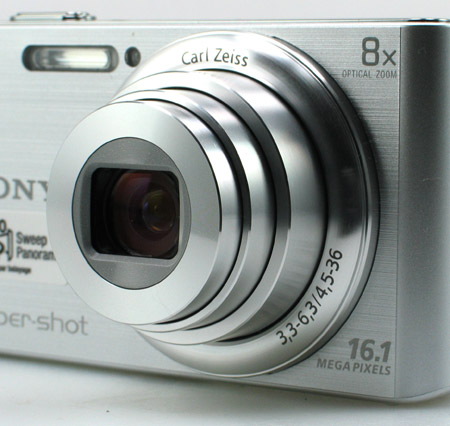 This lens offers an 8X zoom, which is adequate for most casual photography. The 25-200mm focal length also offers a wide angle, but it comes with a little bit of a trade-off. At 25mm wide you will notice distortions at the edges. Also, the sharp details you will see in wide-angle shots will get progressively softer as you zoom in (see examples on the Samples page).
Macro shooting is enjoyable, with the lens able to focus as close as 1.9 inch. My closeups of flowers tended to look sharp and well exposed.
Minimum Focus Distance:
Auto Focus Modes:
The tiny flash on this compact camera does what you'd expect of such a small light source. It peters out short of 10 feet, but works adequately for snapshots within that range. At wide angle, it is rated to reach 9 feet, 2-1/4 inches (now that's a precise rating). At telephoto, it can illuminate adequately up to 6 feet, 6-3/4 inches.
Interestingly, Sony publishes additional ranges for use with ISO 3200, which increases the range to over 17 feet, 4 inches at wide angle. However, as you will see in our test shots on the Samples page, bumping up the ISO this high on this camera is likely to result in unattractive digital noise in your photos.
Flash Modes:

The 2.7-inch LCD has a modest 230,000-dot resolution. That means it's not extremely sharp, and neither is it exceedingly bright. Side to side the viewing angle is fine, but I found that when angling it upward or downward, the screen begins dimming at roughly 45 degrees. Not a problem if you don't tend to shoot overhead or try to get creative with your angles.
The menus offer two settings for the screen resolution (standard and high). Why would you want to lower the resolution of the screen? The manual suggests that standard resolution could lengthen battery life. Unfortunately, the specs posted on the Sony website list no battery life ratings. But my experience suggested it's a good idea, given the poor battery life I experienced.
Shooting with (presumably) a full battery charge with the camera fresh out of the box, I captured 110 photos and 20 short movies on one battery charge. On a second, definitely full, charge, I captured only 89 photos with the LCD setting changed to high resolution.


At the top of the back panel, to the right of the LCD, is the zoom rocker button that controls the 8X zoom lens, and digital zoom if enabled. Rather than have a dedicated movie record button, this camera has a three-position switch for changing from still image shooting to video. The middle position is for capturing panoramic stills.
The remainder of the buttons are, for the most part, conventional. The playback, menu, and trash buttons do the expected. But notice that the trash icon shares space with a question mark - this indicates that while the button deletes images in playback mode, it doubles as the help system in shooting mode.
In addition, the four-way control has an interesting quirk. The left position, graced by a smiley face, is dedicated to launching the smile shutter button, wherein the camera automatically trips the shutter when it can detect a smiling face in the frame. The other three positions do as their icons suggest (from top, clockwise): alter display mode, bring up the flash menu, and offer self-timer settings. However, in shooting mode there are only two display modes: information on or off. But rather than toggle between the two with one button press, this button brings up a two-item menu you must use to select the other mode, then press Select.

The top of the camera is a simple affair - just a power button and shutter button atop the slim body.

There is just one port on this camera - a multi-use AV/USB port that supports high-speed USB 2.0. It's located on the bottom of the camera, between the tripod mount and the battery/memory card door.

The battery slips into its compartment right beside the memory card slot behind a hinged door on the underside of the camera.
Supported Memory Card Formats:

An AC adapter is included with the camera, which allows you to connect the USB cable to the brick, which plugs into an outlet. You charge the battery while it is in the camera. However, I'd be happier to have it recharge in the charger so I could use a second battery, given the poor battery life I experienced. I was only able to capture 110 shots and 20 short videos with the LCD set at standard resolution (though I can't definitively say the battery was fully charged). On a second charge, and the camera's display set to high resolution, the camera captured a paltry 89 shots before calling it quits.