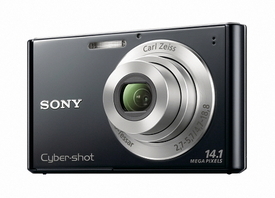 The Sony Cyber-shot DSC-W330 is a 14-megapixel camera offering a 4x optical zoom and a 26mm wide angle lens. Sony also includes their iAuto technology for think free/hassle free shooting as well as a Program mode with access to changing more advanced options. The W330 also has an "Easy" option that covers both still images and video. I am unsure why this was necessary to include, as it is already equipped with the iAuto mode. After using the camera as much as I did, I cannot conceive why anyone would choose to use the Easy setting. At best it simplifies your picture taking due to the lack of settings options, but mostly feels vary constrained because you cannot make any changes to the settings yourself. In contrast, an incredible step by Sony is that they have configured the memory card port to accept SD/SDHC type media as well as their Memory Stick Duo cards.
Construction of the W330 left me wanting more. It feels clunky and, well, cheap; I need to interject that the camera does have a pleasing retail price of only $169.95. But, we all want to feel like we got more for our money than it appears. On this account the W330 does not deliver, but please read on as things do get better. Physical attributes are a mere fraction of the whole picture.
The shooting performance timing tests went well with the camera. We got pretty standard results with the W330 which are highlighted to your right. A couple things to point out are the good results with the shot to shot delay, both with and without using the flash. Also the burst mode was quite good at 0.86 frames per second, although I was disappointed to see that the flash is not available in burst mode.
Remember when I said please read on because things get better? These next two paragraphs are why. The camera may not have won me over with its look and feel, but man can this thing shoot great pictures. Outdoors, the W330 performed fabulously. I was really happy with all of our standard shots that are taken with every camera, as images were sharp and true to the colors. The day I captured them is was definitely sunny and I think the W330 managed the bright sunshine very well. Even my portrait shots turned out great.
Indoors was more of the same. When taking candid shots the camera performed better when using the flash as opposed to trying to take pictures with just available light. A tripod or monopod would better your results if you are shooting without the flash, but the flash did a great job, especially when I set it to the Slow Synchro flash. Take a look at the M&M images 172 and 177, both were taken with the same ISO settings but 177 used the SlowSyncro flash and 172 was straight flash. It really did a great job of filling the scene with even light. When looking at our standard M&M test shots, I was impressed with what the camera did at all the different ISO settings. There was only one issue I noticed. Starting at ISO 1600, the picture really starts to degrade, and when I say that I mostly mean that the colors get darker, and the picture has an overcast grey feel to it. ISO 3200 is, as I often say, not very useful, with images looking very grainy and dark.

Another problem I had with the camera was when trying to use the Macro mode. There is no way to force the camera into Macro mode, you have to use iAuto and wait for the camera to decide that the scene it sees requires the use of the Macro focus mode. Sometimes it works right away, but on other occasions it took a while for the sensor to switch to macro mode.

There are not many editing features, but I was very happy with the in-camera red-eye reduction process. This playback option allows you to quickly eliminate red-eye from your subjects, without having to process the image later on you PC or Mac. Below is a side by side comparison of an image before and after the process.

The video mode of Sony's W330 was average. My most positive comment would be that it does take video. Beyond that, there was nothing that stands out in regards to the video. You can shoot at either VGA (640x480) or QVGA (320x240) resolutions, with audio. At the price point of this camera its main purpose is to take good quality pictures, which the W330 accomplishes.
Powering the W330 is a 3.6V Li-ion battery pack. Sony's website claims that you should get about 230 shots on a fully charged battery. During our use we shot at least the 230 photos, probably more towards the 240 mark. When you add in all the time spent turning it on, viewing the menus, looking through the pictures and testing the different functions, the W330 seems to have plenty of power. The battery is charged via an external charger that will plug into any standard outlet, so purchasing an extra battery pack is recommended, even with the W330's great battery life. You'd hate to miss that once in a lifetime shot due to a dead battery.
Bottom Line - The Sony W330 is a good value. You will get fantastic still images, which is after all why someone purchases a camera, but do not expect any real bells and whistles because they are just not there. With a street price of $169US or less, we have no problem recommending the W330 to anyone in the compact market who is looking for an inexpensive camera with good image quality, that is Very easy to use.