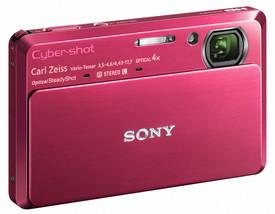 Sony continues to roll out powerful, ultra-compact T-series cameras, including the Cyber-Shot DSC-TX7. This unit replaces the TX1 from last year, and builds off of its platform. While they share the same 10-megapixel "Exmor R" CMOS imager and and offer a Carl Zeiss 4x optical zoom, the TX7 boasts several upgrades. These include a wider zoom range of 25-100 (compared to 35 - 140mm), a larger 3.5-inch Xtra Fine touch panel LCD with TruBlack technology, new intelligent Sweep panorama mode, and improved video options including full AVCHD format, 1080i HD video recording.

Other useful features include Sony's version of intelligent Auto (iAuto), Optical SteadyShot image stabilization, DRO technology (Dynamic Range Optimizer), MS Duo and SD/SDHC/SDXC memory card slot, and TransferJet compatibility. All of these great specifications are packed into a diminutive metal chassis that is not only small, but stylish too with three color choice options: dark blue, silver, and red. To top it all off, Sony also included an all new "Multi Output Stand", which is essentially a camera dock that handles all of the camera's input/output capabilities, and can also power the camera with an optional AC adapter.

Like the Cyber-Shot TX1, Sony designed the TX7 to be a powerful and compact camera, yet still easy enough to use that most any user will enjoy snapping photos or videos with it. This is accomplished by intuitive exposure modes, such as the iAuto mode we mentioned earlier. iAuto mode not only chooses the standard exposure settings (aperture, shutter speed, ISO, white balance, metering, etc.) that any Auto mode controls, but this intelligent program also "scene recognition" technology to incorporate the best possible scene mode settings to the subject being framed. This is all done in within milliseconds, right in the camera with no user input. For those who want to manually select the scene mode, you have access to 12 pre-programmed options; like Pet, Snow, etc. This model also offers more advanced "multi-frame" type modes like Handheld Twilight, Backlight Correction HDR, and Sony's new iSweep Panorama mode.

Like past T-series Cyber-Shots, the TX7 offers a well built feel, thanks in part to it's durable metal chassis. The TX7's feature layout and body design is almost identical to its predecessor, with the exception of the larger 3.5-inch touchscreen. We have found the ergonomics of these cameras to be pretty good when you consider just how small they are. One handed shooting is a breeze, and you can comfortably hold the camera with two hands using the "pinch" technique. Like we've warned in the past, be sure to watch the fingers on your left hand. The TX7's lens is located towards the corner of the body, which is very easy to block with your fingers when not paying attention (or you will get a bit of your finger in the picture). You'll also want to check it for fingerprints often. One issue I had with the TX7 during our tests was with the lens cover. It was much "harder" to pull down compared to past models. I can see some positives and negatives about this. For one, it helps reduce the occurrence of it accidental opening, which would turn the camera on and could waste battery power. On the other hand, until you get use to the tension you could miss some of those spontaneous shots that jump out of nowhere as you are fumbling trying to slide the cover down. Just be sure to practice with the camera a bit, and this will hopefully not be an issue for you. Since the TX7 has a huge touchscreen, there are not many controls left on the camera. Just the zoom lever, power button and shutter release remain; all of which were easy to operate. All other options on the TX7 are accessed using the responsive touchscreen's GUI, which receives instructions from either your fingertips or the included stylus "Paint Pen".

Speaking of the touchscreen system, I found that the interface on this camera was a pleasure to use. The touch panel is very responsive, and allowed me to make changes or enter menus quickly and easily. This is the first "Xtra Fine" display we've had the opportunity to work with, and overall we found it's a very nice screen. With 921,000 pixels of resolution, it can display beautiful fine details and offers pleasing contrast. Their "TruBlack" technology also helps reduce the amount of glare when shooting outdoors in bright sunny conditions. With many digicams, these conditions make it difficult to see your subject on the LCD. I found this new technology worked well, as I never had a single instance where I could not clearly see my subject outdoors. Overall, the touchsceen display on the TX7 is one of the nicest units we've seen yet (as of 8/2010).

Since the TX1 and TX7 share the same image sensor, our image quality findings were similar. The AE (Auto Exposure) system helped the camera capture good exposures in various lighting conditions, with increased dynamic range thanks to Sony's DRO (Dynamic Range Optimizer) system. This allowed for increased details in shadow areas, as well as help control blown out highlights. Colors are pleasing at times, however I did noticed several instances where the camera over-saturated objects and skin tones. Images are relativley sharp, but the TX7's wider lens tends to produce images that are a bit softer than seen on the TX1, with more noticeable edge softness as well. However, the TX7 seems to handle noise much better, as can been seen when looking at our M&M series of photos. When compared side by side, the TX7's images showed considerably less noise at the same ISO levels. In fact, the TX7 performed well right on up to ISO 1600. Even the 3200 setting should be usable for small 4x6-inch prints.

The wider Carl Zeiss "folded" 4x optical zoom lens on the TX7 will give you a better field of view when shooting photos indoors or out. The 25mm wide angle extreme will afford nice landscapes and help with pictures of friends and family indoors. The telephoto end of the zoom range is not great for zooming in on distant subjects, however it will help you frame subjects whether shooting close-up objects or individual portraits. Like mentioned earlier, the lens produced relativley sharp photos, with a noticeable amount of edge softness.

Indoors, I was impressed at times by the TX7's low-light abilities. When the flash is not used, the camera was able to capture some beautiful photos of some stained glass windows at an old museum/church where I was attending a wedding. Even when shooting photos of some of the amazing artwork on the ceilings, the TX7 impressed me. When it comes to using the flash, the camera did well when you consider the size of the built-in flash unit. It had no problem lighting our M&M photo from several feet away, and did well when shooting snapshots during the wedding reception. Like I mentioned earlier, we did see some over-saturation of colors when shooting indoors with the flash, which increased the appearance of chroma (color type) noise.

For those who like to play with more creative settings, the TX7 offers several "multi-frame" capture modes, such as Handheld Twilight and iSweep panorama. I tested both of these modes, and the results were pleasing. iSweep panorama made capturing and stitching the frames together effortless, as this process is handled in-camera. The only thing you need to do is sweep the camera from either left to right, right to left, down to up, or up to down. The finished product is a nice in-camera panorama to share with friends and family. The only issues I had at times were with exposure. We did have a few instances where iSweep produced a panorama that was a bit overexposed. Handheld Twilight also performed quite well. We show an example of this mode compared to ISO 3200 on the samples page. While the ISO 3200 sample looks brighter, there is so much more detail in the handheld twilight example. The fact that six photos are captured in an instant, then combined in-camera in such a short amount of time is quite impressive.

Another improvement on the TX7 is in the Video department. Not only can you capture the typical 720p (1280x720) quality video, but the TX7 offers full HD recording at 1080i (1920x1080), along with several other resolution settings. The full HD mode is recorded in AVCHD format, while the lower resolution modes (like 720p) are recorded using MPEG-4 (.MP4) compression. You also have full use of the zoom while recording, which is a nice feature that most digicams do not offer. Overall our video results were good for an ultra-compact camera. Indoors the camera did well, producing video with very little noise when compared to other models in this category. Like most all digicams, the TX7's built-in microphone is extremely sensitive, so be conscious of where you are standing while shooting video.

Battery life was decent for a camera of this size. Sony claims the NP-BN1 (3.6v, 630 mAh) InfoLITHIUM battery pack can power the TX7 for up to 230 photos. I captured about 185 photos, a dozen or more short video clips, and completed various other tests with some power to spare. Since the battery is charged outside the camera in the handy AC charger, we highly recommend picking up a spare pack if your budget allows.

Bottom line - like with past T-series Cyber-Shots, we enjoyed using the DSC-TX7. This is a very portable camera that slid into my front pants pocket with ease, and with typical Sony performance, the TX7 was always ready to capture the moment. I feel it produces high-quality photos, and does so much faster than the large majority of it's competition; especially with it's 10fps burst mode. My only gripes about the TX7 were instances of over-saturation of colors, the new 4x optical zoom is a bit softer than previous versions, and the sliding lens cover requires more force than seen on past T-series cameras. That said, with a street price of $399 or less we feel the DSC-TX7 will please most users, and offers a good value for those who want the latest in Sony's advanced technologies packed into a slim camera. If you are simply looking for an easy to use point-n-shoot camera, $400 may seem steep, so you'll want to take a look at some of Sony's more affordable models, like the Cyber-Shot DSC-W350 for instance.