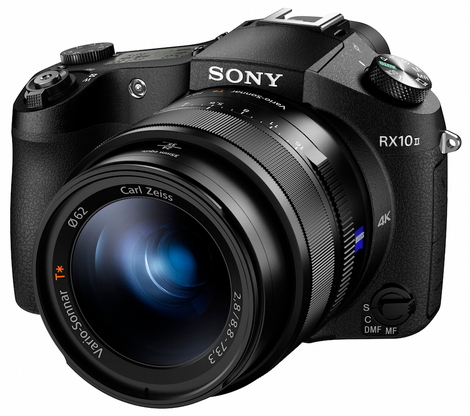 Sony has announced two new high-end RX-series point-and-shoot cameras for 2015. Meaning, these digicams may not have interchangeable lenses, but their performance specifications best many entry-to-mid-level DSLRs and Mirrorless ILCs.
Let's explore the RX10 II (model DSC-RX10M2), which boasts a 24-200mm (35mm equivalent) ZEISS® Vario-Sonnar T F2.8 lens zoom lens inside a DSLR-esque body and equipped with Fast Intelligent AF capable of finding focus in 0.09 seconds.
The twin hearts of the RX10 II are a 20.2MP 1.0-type stacked Exmor RS CMOS image sensor and DRAM memory chip. Paired together, this sensor and chip are able to produce rapid fire still images (up to 16fps at full resolution) as well as record 4K (QFHD 3840x2160) movies @ 100Mbps for up to 29 minutes -- Full 1080p HD is captured at 50Mbps. There's also an option to shoot 16.8MP still images during 4K movie recording.
If that's not impressive enough, the RX10 II can shoot 40x slow motion at up to 960fps at a reduced resolution. How fast is that? It takes 80 seconds for 2 seconds of 960fps footage to play back at 24p. Also included is an "Anti-Distortion Shutter" (up to 1/32000 second), designed to minimize "rolling shutter" in fast movie objects.
Lastly, the WiFi & NFC are built in for easy image / video back up and sharing, not to mention the ability to use your smartphone or tablet as a remote display or control for the camera.
The RX10 II's 2015 sibling camera is the RX100 IV (model DSC-RX100M4), which costs about $300 less because it has a shorter 24-70mm zoom range and can only record 4K video for 5 minutes. However, the RX100 IV is a much more compact camera, has a wider maximum aperture, and can shoot 2 more frames per second than the RX 10 II.
RX10 II Features
The Sony Cyber-shot RX10 II (model DSC-RX10M2) high-zoom camera will be available this July for about $1300.