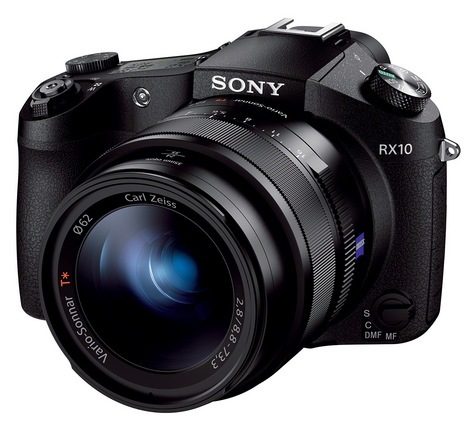 Sony has added an impressive zoom lens camera to its RX-series of compact fixed-lens cameras. The new DSC-RX10 features the same 1.0-inch 20.2-megapixel BSI CMOS image sensor that debuted in the RX100 last year. However, where the RX100 was only a 3.6x optical zoom lens, the RX10 sports an 8.3x optical F/2.8 Carl Zeiss® Vario Sonnar T zoom lens. That's a 35mm equivalency of 24-200mm. New for this year is the BIONZ "X" image processing engine -- three times faster than previous BIONZ engines -- as well as contrast-detection autofocus (AF) system with a Direct Drive SSM (Super Sonicwave Motor) mechanism. Meaning, this autofocus is faster and quieter than ever before. Lock-on AF tracks moving objects even if they leave the OLED TruFinder or the 3.0-inch WhiteMagic LCD display. And Eye AF has been designed to focus on a subject's eyes, or perfect portrait shots.
The RX10 can continuously shoot 10 frames-per-second, at full resolution with AF engaged, as well as Full HD 1080p video at 60-fps or 24-fps. This camera includes a built-in Audio Level Meter as well as a headphone output and microphone input. If a standard stereo mic isn't good enough for your cinematic endeavors, there's an optional XLR-K1M adapter to add an XLR microphone. P/A/S/M exposure controls are available for both still photos and video recording.
The Cyber-shot RX10 includes Wi-Fi for connecting the camera to any iOS or Android smartphone (via a free app), as well as NFC (Near Field Communication) for one-touch connection of NFC-enabled Android devices. Once a connection is made, via NFC or Wi-Fi, the RX10 can share photos wirelessly via the mobile device, display still images on an HDTV or 4K television, or you can use your phone as a remote control for the camera. There's also built-in support for TRILUMINOS Color on Sony BRAVIA televisions.
Sony RX10 Features
Sony's Cyber-shot RX10 will be available this November (2013) for around $1300.
Additional Product Views