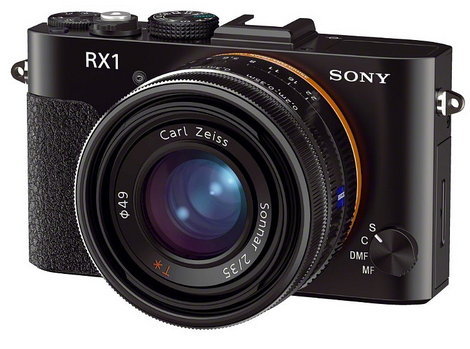 For fall 2012, Sony has unveiled a game changer in the Prosumer camera niche with the most powerful non-interchangeable lens point-n-shoot to ever to grace the face of the earth; the new Cyber-Shot DSC-RX1. Just a few months back we learned about the DSC-RX100, a super compact camera that packs a new 1-inch CMOS imager for awesome image quality from a compact package. Well, Sony has run with this idea to create the World's first ever compact point-n-shoot to offer a full-frame (35mm) Exmor CMOS image sensor! That's right, I said Full-Frame.

The RX1 is packed with the same 24.3-megapixel Exmor CMOS image sensor that Sony redesigned for user in their a99, and NEX-VG900 cameras; along with the same new BIONZ image processor. This sensor peers through an all new fixed 35mm lens, which Sony claims is the highest quality lens to ever grace the Cyber-Shot line. The Carl Zeiss Sonnar T* f/2.0 35mm lens promises extreme clarity, along with amazing background defocus (aka bokeh) thanks to its wide open aperture options and 9-blade circular aperture.

It's all about size, speed, and quality with this camera; and they've aimed the RX1 squarely at professional photogs and enthusiasts who want the versatility and quality of a full-frame sensor packed into a compact camera that they can carry around much easier than their bulky dSLR. The RX1 is quite a bit larger than the RX100, with offering a slightly smaller profile than Sony's NEX-7 with the 18-55mm lens attached.

On top of incorporating their latest full-frame dSLR NDA into the RX1, it also boasts a high level of exposure control with full manual, aperture priority, and shutter speed priority options. However, they've still kept some of the features we see in the Cyber-Shot bloodlines, like Smart Auto, intelligent Sweep Panorama, Program mode, Auto HDR and various Scene mode options.

The RX1 looks to be a game changer for sure, and is one of the most impressive cameras we've had the pleasure of drooling over. While the RX1 seems like it's almost the perfect compact camera, you're going to pay for those features with a MSRP of $2799 USD. Stay tuned as we eagerly await Sony to send use a unit for testing.