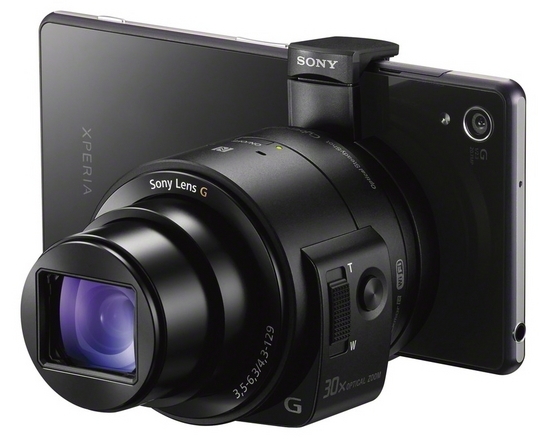 Sony has announced two new "lens-style" cameras, which are simply lenses with built-in image sensors, yet no standard display. Instead, you download the PlayMemories App to any iOS or Android smartphone to use the camera as your display where you can frame shots, adjust zoom, release the camera shutter, start/stop video recordings and control other basic camera settings. New for this year's lens-style models are gridlines for easy framing and "mirror mode" for self portraits.
Oddly, Sony did not specify the image sensor size for new DSC-QX30 in their press materials. However, the press photographs says "Exmor R" implying this is a 10.2-megapixel CMOS image sensor capable of recording Full HD 1080/60p videos. The QX30 also boasts fast lock-on AutoFocus (helps for moving objects) and continuous shooting up to 10 frames-per-second.
This lens-style camera's main selling feature is its 30x optical zoom lens with optical SteadyShot to reduce vibrations at full Telephoto and a digital zoom feature that doubles the overall zoom range (FYI, though, digital zooms reduce image quality).
Sony DSC-QX30 Features:
The new QX30 lens style camera will be available for $350 this September (2014).
Additional Product Views