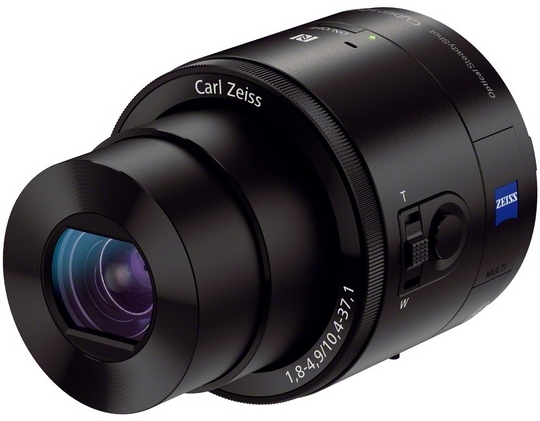 Sony has just announced two new QX-series "lens-style" digicams, the Cyber-shot DSC-QX100 and the QX10. What exactly is a lens-style camera?
Terrific question.
As you can see above, a lens-style camera looks like a small interchangeable DSLR lens, but is, in fact, the whole camera. Wait, you're saying. This doesn't have a viewfinder or an LCD display. Are we sure it's really a camera? How can I take pictures when I don't even know what I'm looking at?
You know how it's not exactly convenient to lug around a large smartphone (which takes okay pictures at best) AND a point-and-shoot digital camera (which doesn't make calls, have full Internet access, or any number of important features)...
Sony's QX-series cameras use the free PlayMemories Mobile app (available for both iOS and Android devices) to wirelessly connect to your smartphone, which turns the phone's display into a "real-time viewfinder" where you can not only release the shutter and start/stop movie recording, but also access the camera's menu system. You know, adjust settings like shooting mode, zoom, Auto Focus area, etc. The app works with WiFi as well as NFC-compatible devices.
Pictures (and videos) are saved simultaneously on the camera as well as your phone, where they can be instantly shared to all your favorite social media sites.
To make the whole experience feel more natural -- to make sure you don't have to hold the lens in one hand and your viewfinder in the other -- Sony's QX-series cameras include a mechanically adjustable adapter (see photos below) to mount the camera to your smartphone. However, if you want to use a QX series camera separate from a smartphone, such as mounted to a tripod, that's perfectly okay too.
Of the two new models, the DSC-QX100 is the premium model, costing twice as much as the $250 QX10. It features the same 1.0-inch 20.2-megapixel Exmor R CMOS image sensor as the Cyber-shot RX100 II, a BIONZ image processor, a 3.6x optical Carl Zeiss Vario-Sonnar T lens, and a dedicated control ring for manual focus and zoom adjustments. The QX100 also boasts several different shooting modes, including Program Auto, Aperture Priority, Intelligent Auto, and Superior Auto, which picks out the perfect camera settings from 44 preset conditions.
Basically, if you love your Apple or Android smartphone, but are not impressed with the quality of the photographs (and video) it is able to take, then you might want to consider one of Sony's new lens-style digicams.
Sony Cyber-shot DSC-QX100 Lens-style Camera Features
The Sony Cyber-shot DSC-QX100 Lens-style Camera will debut later this month (September, 2013) for around $500.
Additional Product Views