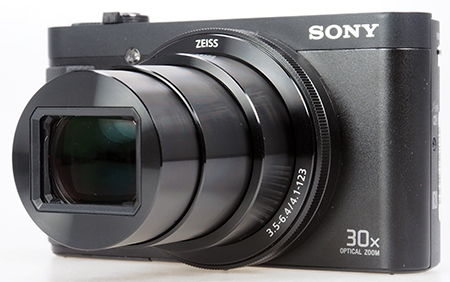 Assisting with your low-light shooting situations; the HX90 features a compact, pop-up flash unit. Set to ISO Auto, the flash has a range of up to approx. 17.75ft (W), allowing you to make use of it as long as you are close to your subject. Using the optical zoom quickly shortens the flash range down to approx. 8ft (T) at the zoom end. This flash is also very convenient as a fill flash, helping to reduce shadows in bright lighting conditions.
As an alternative to shooting with the LCD screen, Sony has included a pop-up Electronic Viewfinder for eye-level shooting. The lever on the left side of the camera allows the EVF to pop-up and turn on the camera, if set to in the camera menu. After popping up, the viewfinder has to be pulled out in order for the image to become clear. Dioptic adjustment allows anyone to adjust the image to be clear, making it fun to shoot with. Sporting 638.4K dots, this tiny EVF shows a good deal of fine detail and has good color reproduction. It is noticeable that you are looking at a tiny LCD screen, as it is not as clear or sharp as an optical viewfinder, something that Sony has done an excellent job with on some of their other camera models.
Your other option for composing and viewing your images is the 3.0-inch, 921.6K dot Tilting LCD screen. With a higher resolution and the ability to tilt a full 180°, this became our preferred method of shooting. Only in very bright light was the EVF easier to shoot with. Bright and sharp, the LCD shows great color reproduction and loads of fine detail. Its ability to tilt 180° also makes it easy and fun to capture accurate "selfies".
On top of the camera you will only find a few camera controls, making it easy to operate and very un-intimidating to beginner photographers. From left you right, you have the Power Button, Flash release, Shutter Release coupled by the zoom control and the Shooting Mode dial.
On the back of the camera you will find a few more controls, giving the user enough options to get through the shooting settings and camera menus, without overwhelming them. From the top to bottom you have the Dedicated video recording button, Fn and Menu buttons, 4-way controller, and the Playback and Help menu buttons. The 4-way controller acts as shortcuts to a few commonly used shooting settings. It also acts as a command dial for changing settings and easy navigation of the camera menus. The button in the middle allows you to select settings and make changes.

The HX90 features two input/output ports, one on the right side of the camera and one on the bottom. On the right is the High-Speed USB Multi-port. It is used to charge the camera or connect the camera to a computer or printer.
Powering the camera is Sony's NP-BX1, 3.6V, 1240mAh rechargeable Li-Ion battery. This battery is used with several of Sony's Cyber-Shot models, and will provide the HX90 with up to 395 images captured on a single charge. The camera also comes with a USB cable and adapter to charging the camera. Sony sells a portable charging unit for these batteries, which makes it easier to keep more than one battery charged and ready to go at all times.
Storing your recorded still images and videos is accomplished with the SD/SDHC/SDXC memory card that is inserted next to the battery. While most of the shooting modes will work with just about any SD card, the XAVC-S HD video recording mode requires that you have a minimum of a Class 10 UHS-1 SDXC memory card in order to record the high quality video.