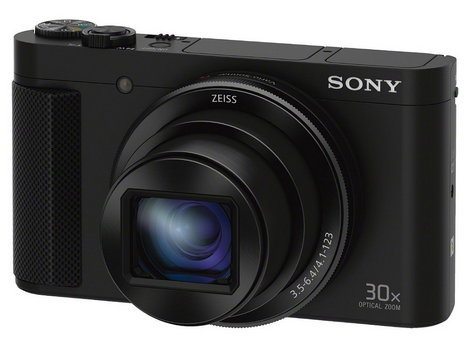 So, what makes them different? Other than the model numbers, the HX90V adds several features over its WX sibling. These include a slightly enlarged hand grip, a retractable OLED viewfinder (more on that in a second), and built-in GPS functionality. These additional features will cost you about $100 over the WX500.

The retractable OLED viewfinder offers 638K dots of resolution, 100% frame coverage, 5 levels of brightness adjustment, and a built-in eye sensor. It retracts neatly inside the camera on the left hand side (as you're holding the camera), much like a small built-in flash.

For you video buffs, Sony has included their "broadcaster's quality" XAVC-S video format in both of these new models, which offers full HD video capture at 60fps or 24fps, at a bit rate of 50Mbps. You can also choose to shoot MP4 format video at 60 or 30fps.

The Sony Cyber-shot DSC-HX90V is available in black, with a MSRP of $430. See our lowest price box at the top right of this page to see current online pricing.