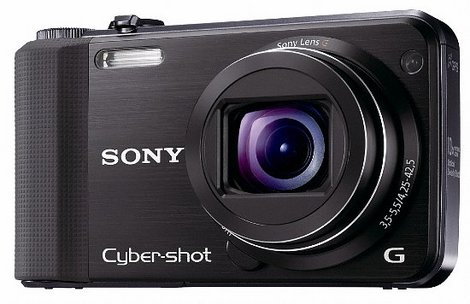 The DSC-HX7V's large 16.2-megapixel "Exmor R" back-illuminated CMOS sensor helps the camera perform much better in low light situations, along with allowing the camera to capture images at up to 10fps. On top of the full 1080i (60i) HD video option, Sony includes their new Dual Rec Mode. This technology allows you to capture still images up to 3-megapixels in size while you are recording video. While the camera offers Automatic and manual exposure settings, Sony has incorporated their "In Camera Guide", which helps those who find cameras options confusing with detailed explanations of settings. The HX7V also offers Background Defocus Mode (meant to generate the shallow depth of field typical of DSLRs), and Sony's proprietary Intelligent Sweep Panorama technology (users pan the camera across a vista and the camera automatically creates a wide panorama shot).

Sony DSC-HX7V features include:
The DSC-HX7V will be available in black, white, red and brown this March (2011) for about $300 US.