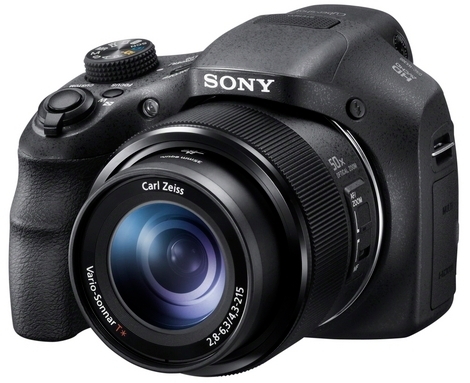 Sony has announced the DSLR-styled "Megazoom" Cyber-Shot DSC-HX300. The 20.4 megapixel CMOS image sensor pairs with an astounding 50x optical zoom. With a reach like that, you'll be thankful Sony has made its Optical SteadyShot image stabilization technology two times more powerful than previous models. Also upgraded is the camera's AutoFocus system, which is two times faster than the HX200 (and other previous models). Battery life has been improved as well, with the camera capable of capturing up to 300 still images in a single charge.
While you may be able to see great distances, snap incredibly close Marco shots, or capture the action with speeds up to 10 frames per second (in full resolution); the HX300 has also you covered for extremely wide angle pics with Sony's Smart Panorama Mode. Throw in Full HD 1080p video recording and an ISO range up to 12,800, and your still images / videos will be crisp and noise-free in all but the darkest lighting conditions.

The Cyber-Shot DSC-HX300, available in black, will start shipping in March, with a suggested retail price of $499 USD.