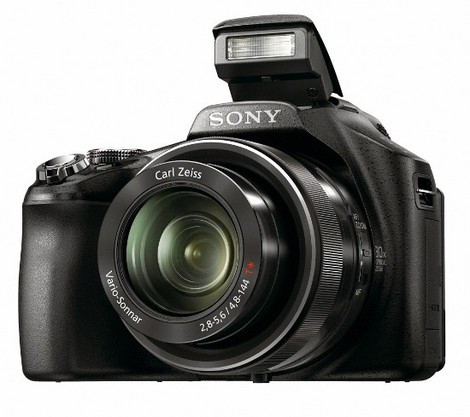 The Sony Cyber-shot DSC-HX100V is yet another powerful HX-series super-zoom from Sony this year (2011). This offers almost identical specifications to the DSC-HX9V which was announced alongside the HX100V. However, the HX100V boasts a more powerful Carl Zeiss Vario-Sonar T* 30x optical zoom lens, with a 35mm equivalent range of 27 - 810mm (in 4:3 aspect mode), and a tilting 3.0-inch LCD with TruBlack technology. Other appealing features include Optical SteadyShot image stabilization, a 16.2-megapixel Exmor R CMOS image sensor (back-illuminated type), Full HD 1080/60p AVCHD video recording, and 3D still images / panorama capabilities.

Like the HX9V, Sony incorporated various useful exposure options on the HX100V, many of which you'll only find on Sony cameras. Thee include options like Intelligent Sweep Panorama HR (High Resolution), which can capture up to a 42-megapixel panoramic image with a simple press of the shutter release and sweep of the camera. The HX100V also offers 3D Sweep Panorama for creating stunning 3D scenes that can be viewed later on your 3D HDTV or photo frame. Like many of their new Cyber-Shot models, the HX100V also boasts built-in GPS and Compass functionality, allowing you to record your location and shooting direction when out snapping photos, so you can view them later on your PC.