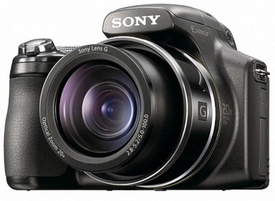 Sony's new Cyber-Shot HX1 is a 9-Megapixel Super-Zoom digicam that is packed full of new and useful features including a 9.1-Megapixel Exmor CMOS imaging sensor, Face Detection and Recognition, Dynamic Range Optimizer, SteadyShot image stabilization, 10 fps burst and iSCN (intelligent scene selection) just to name a few . It is also the first camera to feature Sony's Sweep Panorama shooting mode or any other shooting mode like it. This model also includes a Bionz image processor and 20x optical G lens. These two items are usually only found with Sony's Alpha dSLR and Prosumer Video cameras. The Bionz image processor allows for the capture of 1080p HD video as well as a hand-held Twilight shooting mode that allows the camera to capture 6 images in less than a second in order to combine them into a crisp, clear image in very low-light situations.

Sweep Panorama allows you to press the shutter release, then move the camera vertically or horizontally, while the camera continuously captures images. The images are then stitched together inside the camera, so there is no computer work to do later. Once the image has been stitched together, the image can cover up to a 224° angle of view, much more than any wide-angle lens can provide. This allows for vast landscapes or huge vertical images that you normally not be able to capture.

Sony's iAuto (Intelligent Auto) shooting mode combines several of their advanced shooting features to create the best looking images possible without you having to worry about the camera's settings. It combines the iSCN (intelligent Scene selection), Face detection and SteadyShot image stabilization features in order to analyze and determine the optimal settings for each picture you take using this mode. iSCN mode works in two different settings, either auto or advanced. In advanced mode, the camera will capture an image in auto mode, then immediately capture another image using optimal settings and save both, allowing you to choose which to keep at a later time.

The HX1's body is very similar in size and weight to most of the other super-zoom cameras on the market. This makes it easier to carry than a dSLR, which is the only other type of camera that would be as versatile (with multiple lenses on hand of course). The body is comfortable and easy to operate, even allowing the user to shoot with just one hand. Helping to frame your images in difficult shooting situations, the HX1 features a 3.0-inch, tilting display. This allows the photographer to easily shoot over or under objects with incredible ease. The screen itself features 230,000 dots of resolution, which shows good detail when framing or reviewing your images. We would have liked to see a bit more resolution on this display, but it did perform quite well during our testing. For those who prefer a viewfinder instead of the LCD, Sony also included an EVF (Electronic View Finder). This unit not only displays the live image, but will also show all of the camera information that is normally shown of the LCD.

Performance from the HX1 is excellent for a camera in this category. The HX1 is able to capture its first image in just 2.4 seconds after the photographer presses the power button. The camera's shutter lag is less than 1/10 of a second when the camera is pre-focused, and between 1/10 and 7/10 of a second when allowing the auto-focus to work, depending on the amount of available light and focal length. In single shot mode, the camera's shot-to-shot delay is 1.16 seconds between frames without the flash and 1.64 seconds when the flash is in use. The HX1 uses an incredibly fast shutter mechanism that allows the camera to capture 10 images in just 0.8 seconds when shooting in high speed burst mode. This is faster than the 10fps that Sony claims the camera can handle. The camera also features medium and low burst modes with that captured photos at 5.56fps and 2.27fps respectively during our testing. All of our tests were completed using a 4GB, Sony Memory Stick PRO Duo memory card, Program Mode, ISO Auto, Flash off and all other settings at the factory defaults. All times may vary depending on lighting, camera settings, media, etc.

Our outdoor image samples show us that the Sony captures slightly soft, well exposed images with realistic colors. The only problems that we ran into when shooting outdoors were chromatic aberrations and a noticeable amount of noise when viewing the images at 100%. These problems are present in almost all of our outdoor shots, but the chromatic aberrations are most notably in the Golden Dragon image. If you look along the roof at 100% it cannot be missed. The 20x optical zoom lens, which helps the HX1 offer a great deal of versatility, is perfect for shooting vast landscapes on the 28mm wide end, while photographing distant objects are absolutely no problem with the 560mm telephoto end. With such a large telephoto zoom, Sony has included its SteadyShot image stabilization to compensate for the shakiness of your hands. Besides the chromatic aberrations, you will also see a noticeable amount of barrel distortion on the wide end of the zoom.

One thing that is a lot easier to see in our indoor shots is the amount of noise within the images at all ISO levels. Even at the lowest sensitivity settings, there is enough noise to slightly soften the fine edges and details of the image. This noise increases quickly, becoming very noticeable at ISO 400. Once you reach ISO 800 and above, the amount of noise really starts to dull the colors in the image, as well as greatly softens the image. Assisting with your low-light images is the built-in flash unit with a powerful range of up to 30.2-feet/wide or 16.7-feet/telephoto at ISO auto. This will allow you to light a descent sized room, providing enough light for groups or people or individuals from a distance. This flash also does well when shooting macro images, and does not blow out your subject from just a few inches away.

Capturing portraits with the HX1 is a treat. When the camera is in Portrait Mode the face detection feature allows the camera to quickly identify that there is a face within the frame. It then quickly focuses and tracks this face as long as you keep the shutter half-pressed. Our sample portrait image shows that the exposure and colors of the detected faces are excellent. The camera also utilizes the flash very well, allowing the camera to keep the ISO as low as possible. A more advanced feature within the Portrait Mode is Face Recognition. You can now record and store faces in the camera's memory. Once this is done, the camera will automatically give priority to these faces over any others that are detected, making sure the most important people in your life are also the most important in your photographs.

Now that 720p HD video is becoming a standard on most consumer digicams, Sony has stepped it up a bit and added a full 1080p HD video capture mode with stereo sound. They have done an excellent job with this as the videos are bright, clear and playback is incredibly smooth. They are a pleasure to watch on either the camera's LCD screen, a computer or an HDTV. The camera includes the ability to use the full 20x optical zoom of the lens while the camera is recording, which is not common on most long zoom cameras. This will add some additional sound noise to your videos, more than the standard noise that the incredibly sensitive microphone picks up. An external mic input would have been an excellent addition to this camera, giving the user a way to record higher quality audio to go with the camera's high quality video.

Powering the HX1 is a 6.8V, 900 mAh rechargeable Li-Ion battery pack which allowed us to capture over 150 images and several videos while completing our tests. This comes up well short of the 390 images that Sony claims the battery can provide. Some of this can be contributed to the use of the special features on the camera as well as transportation and use of the camera in the extreme cold. We were able to complete our tests on a single charge and do not feel that the number of images that we were able to capture were as bad as the numbers say. None the less, we recommend having a second battery charged and on hand at all times, just in case.

Bottom Line - Sony's new Cyber-Shot HX1 features a 9.1-Megapixel Exmor CMOS imaging sensor, Bionz image processor and 20x optical zoom "G" lens, all of which are normally reserved for dSLR cameras and top level camcorders. These allow for the great image quality and excellent performance of the camera as well as the availability of some of the new and advanced shooting modes that Sony has included. The only drawback to the image quality is the amount of noise we saw at all ISO levels and the chromatic aberrations that appear quite often. With a MSRP of US $449.99, this is a powerful and innovative super-zoom digicam that is perfect for anyone looking for the best set of performance and features they can find.