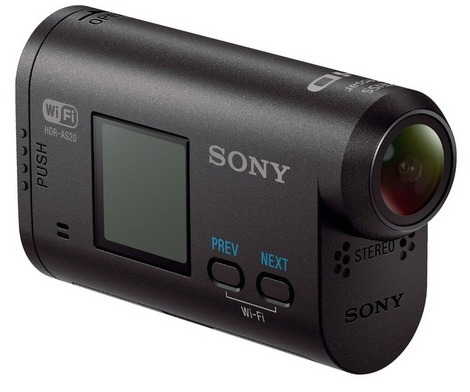 Sony continues to expand its GoPro-inspired Action Cam series with the all new $199.99 HDR-AS20. Boasting a 16.8-megapixel back-illuminated Exmor R CMOS image sensor, the AS20 has six unique video recording modes, including up to 4x slow motion and Full HD 1080p video in stereo sound (thanks, built-in microphone!). There's also SteadyShot electronic image stabilization, but that reduces the camera's F/2.8 ZEISS Tessar lens form 170 degrees field of view down to 120 when in use.
The AS20 also features built-in Wi-Fi that, when paired with the PlayMemories Home app on a compatible smartphone or tablet, allows users to edit videos, share them to Facebook or YouTube, and even combine multiple angles with Video Merge. The camera, which comes standard with an underwater housing, is able to record up to 130 minutes of video when Wi-Fi is on, but can extend recording times up to 150 minutes if you leave the Wi-Fi off.
While not included with the initial purchase, the optional RM-LVR1 Live-View Remote is also waterproof, has an LCD screen to act as an external monitor, and can control up to five Sony Wi-Fi-enabled Action Cams at once (a must for extreme multi-cam shoots).
Sony AS20 Action Cam Features
The Sony AS20 Action Cam will be available this August (2014) for around $200.
Additional Product Views