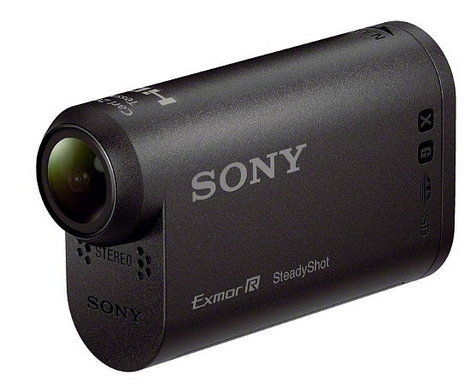 Sony as just entered the POV (Point of View) video camera category, which has been dominated by the GoPro cameras for some time, with their new ActionCam offerings. Sony has plans to change that with two new models, the ActionCam HDR-AS15 and HDR-AS10. These models are identical in features, with the exception that the AS15 boasts built-in Wi-Fi.

The new ActionCam models sport a 16-megapixel Exmor R CMOS image sensor, Carl Zeiss Tessar 170 degree fixed lens, built-in image stabilization, as well as high-speed video options. All of this is packed into a tiny shell that measures 52mmx67mmx22mm, and benefits from various cases and mounts to offer almost unmatched versatility in mounting options. Not only does Sony include a waterproof housing for the ActionCams, but they have also developed a "HandyCam" type grip/case that includes a built in, swiveling 2.7-inch LCD screen - only $99,99 USD.

The included underwater housing can be submerged up to 60 meters (197ft), and also boasts a standard tripod socket on the bottom for endless mounting options. They also offer a replacement door pack ($49.99 USD) which includes three new doors for the housing; a flat lens door for divers, an open door for enhanced audio, and a replacement curve lens door for standard use. And, if you somehow destroy or lose your underwater housing, you can get a new one for only $39.99 USD. Lastly, on top of various muting options, including a head strap, bike mount, suction cup and adhesive mount;, Sony is going to offer an Angle adjustment mount ($19.99 USD) that gives you 0-105 degrees of adjustment and two tripod screws.

Like we mentioned earlier, the HDR-AS15 boasts built-in Wi-Fi, which also gives it access to Sony's new PlayMemories Camera and Mobile Apps - including their Smart Control App for remote controlling the AS15. Stay tuned as we await an eval unit to arrive.

Both the HDR-AS15 and HDR-AS10 will start shipping next month (September, 2012), and the kits include the underwater/protective housing, a Li-ion battery pack, and two adhesive mounts. The AS10 comes in at $199.99 USD, while the Wi-Fi enabled AS15 comes in at just $269.99. Some of the accessories (Replacement door pack, Desiccant sheets, and "HandyCam grip/case") will not start shipping until sometime between October and December, 2012.