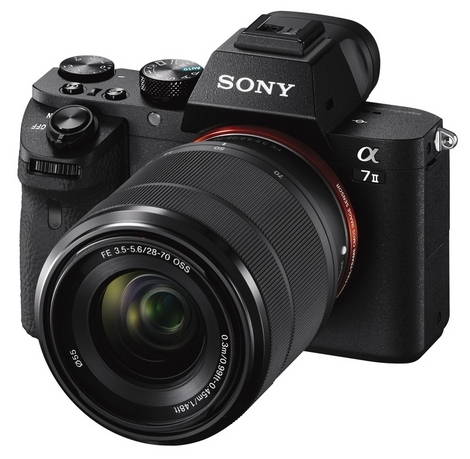 The Sony Alpha 7 ILC -- a camera so good it has been atop our annual Holiday Gift Guide for two years in a row -- is getting a makeover for end of 2014 / early 2015. The newly dubbed a7 Mark II sports similar specifications to the a7, including the same 24.3-megapixel full-frame Exmor CMOS image sensor, and 3.0-inch tilting display. However, the a7 II is the world's first full-frame camera with a 5 axis image stabilization (compensates for up to 4.5 stops) and it should start up 40% faster than its predecessor. Also enhanced for the Mark II is the Fast Hybrid AutoFocus, which combines a 117-point focal plane phase-detection AF sensor with 25 contrast-detection AF points for a 30% increase in Auto Focus times and tracking, and is good for a 5fps high-speed shoot (with AF engaged) for up too 77 "JPEG Fine" L frames.
If that weren't promising enough, Sony has added support for the newer XAVC-S video codec, effectively doubling the bitrate of the standard AVCHD format. That means your Full HD Videos, in 60, 30, or 24 frames-per-second, will be capable of rivaling Hollywood cameras, especially when you add in the S-Log2 gamma setting with its 1,300% wider dynamic range to reduce whiteout and blackout.
Finally, the Sony Alpha 7 Mark II includes built-in Wi-Fi and NFC technologies. Compatible with Sony's PlayMemories Camera apps for iOS and Android devices, it's super easy to connect the a7 II to your smartphone or tablet to back up files, remotely control the camera, and share pictures and videos with family and friends.
Sony Alpha 7 Mark II Features
UPDATED (12/1/2014):
The Sony Alpha 7 Mark II will release on December 9th of this year. $1700 for the body only, or $2000 for a kit that includes an FE 28-70mm f/3.5-5.6 OSS zoom lens (model SEL2870).
Additional Product Images