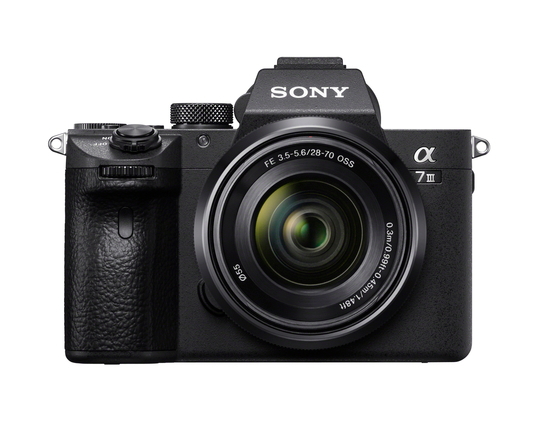 NOTE: This article is a PREVIEW. Our Sony A7 III FULL REVIEW can be found HERE!
Buy your Sony A7 III via Amazon here: http://bit.ly/SonyA7M3
When some companies launch a "basic" model, they usually have no frills and are kind of boring as they want you to pay more to upgrade. I don't even think they want to sell the basic model sometimes, it's just so you can compare the more expensive one to it and say to yourself "it's really not that much more to get all these features." Then Tesla came out with the Model 3, which wasn't boring or lacking in features, and Sony just did the same thing.
Sony calls their new A7 III full frame sensor camera the "basic" model in the A7 lineup, which I suppose is true when you compare it to the high-resolution A7R III or the low-light monster A7S models (everyone's expecting an A7S Mark III upgrade in the near future).
Still, the A7 III is a sub $2000 camera has features like 4K HDR video with 5-axis IBIS, 120fps 1080p HD, and 15 stops of dynamic range. In terms of pricing, the A7 III will go up against cameras like the Canon EOS 6D Mark II, Olympus OM-D E-M1 Mark II, Panasonic GH5, Fujifilm X-H1, and Nikon D750. But those two DSLRs are limited to HD video only and, while the GH5 offers pro-quality video codecs and frame rates, yet Panasonic and Olympus have the weakest video AF systems and dramatically smaller image sensors. So, really, if you want a modern 4K camera for under $2,000, you're looking at Sony and Fujifilm and only the Sony is full-frame.
At the heart of the A7 III is a brand new full-frame 24.2MP Back-Illuminated Exmor R CMOS Sensor. Sony is known for their image sensors worldwide and the fact that they made a new one just for this camera shows they're not cutting corners by recycling old product. How evolved is this technology? The front-end LSI almost doubles the readout speed of the sensor. Put that with the updated BIONZ X processing engine and you have a camera that can process images 1.8 times faster than the A7 II that it replaces. All that wordy tech also boosts the ISO range to 100 - 51200 that's expandable up to 204800, which is four times more than the A7 II. Honestly, this is not a basic camera.
They should've made this camera the first H designation of the A7 line as it's a perfect hybrid of the A7R III and the A7S II. The extended ISO range gives the A7 III 15 stops of dynamic range (at lower ISOs) and you can capture up to 40 14-bit RAW files even in silent continuous mode, which is ludicrous. At 10fps, using the e-shutter or mechanical shutter, that's a full four seconds of RAW shooting.
The video on this camera is also something to behold as it's capable of 4K HDR video oversampled from 6K full pixel readout at up to 30 fps in S-Log2 and S-Log3. In video mode, the camera uses full pixel readout across the full width of the sensor without pixel binning. Oh yeah, it does all that with 5-axis image stabilization, two SD card slots and the new Z battery from the A9 and A7R III that, when used on this camera, can deliver up to 710 images on a single charge. Look at this incredible piece of technology.
If there's one word you should take away from the new A7 III, it's speed. This camera was built to perform and having good genes helps as it inherits the A9s 693 point focal-plane phase-detection autofocus that has 425 contrast AF points that together cover almost 93% of the sensor. It does all of that 2X faster than the A7 II did too.
KEY FEATURES
OTHER IMAGES
(shown with the FE 28‑70 mm F3.5‑5.6 kit lens)
PRICING & AVAILABILITY
The Sony A7 III will be available this April for about $2000 US for the body only and $2200 in a kit with the FE 28‑70 mm F3.5‑5.6 kit lens.
Buy your Sony A7 III via Amazon here: http://bit.ly/SonyA7M3