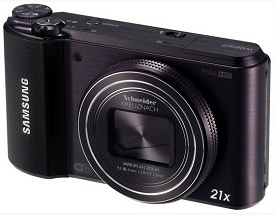 Although thin point-n-shoot cameras with large zoom lenses are a bit more common in the market than they were a couple of years ago, it's still always interesting to see one; such as the Samsung WB850F. Throw in quite a few impressive high-end add-on features, and the WB850F will grab the attention of beginner and intermediate photographers alike.
Samsung has positioned the WB850F as one of its top-end models in the point and shoot market. This camera includes a large collection of great features, including a built-in GPS unit, Wi-Fi capabilities, full HD video recording, and a few different high-speed burst modes. If you don't need those components, you can still appreciate the 21x optical zoom lens, the 3.0-inch high-resolution AMOLED screen, and the pop-up flash unit, as well as the 16-megapixels of resolution.
However, beginning photographers may find the GPS and Wi-Fi a bit confusing to set up. The WB850F's basic photography features are pretty easy to use, thanks to some built-in help screens and the Smart Auto mode, but the more advanced features may not be useful for someone who doesn't have a lot of photography experience. In addition, all of those advanced features really shorten the battery life of the WB850F, which can be very frustrating. It may be a little tough to justify the cost of the WB850F unless you plan to use the Wi-Fi and GPS capabilities extensively.
Once you have the GPS feature on the WB850F set up, it works pretty well. You will need to download
quite a bit of data to make the GPS feature work, at least 1GB, and all of the data must be stored on the
memory card. This will limit the number of photos you can store, especially with a small memory card.

I found that the WiFi transmitter in the WB850F works pretty well, although it's not as powerful as the
transmitter in your laptop computer; meaning the WiFi signal from the WB850F camera might not
reach your WiFi router from all of the areas in your home that your laptop WiFi will work. Still, it's a
handy option to have for quickly uploading images, while you continue to shoot.