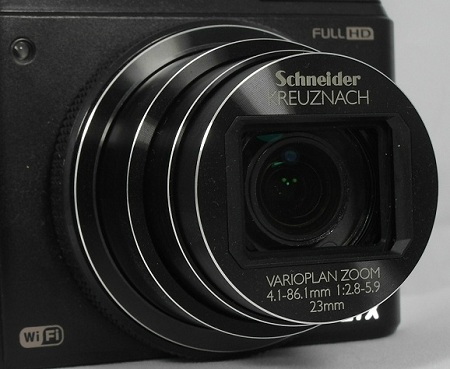 One of the best features in the WB850F is its 21x optical zoom lens, which covers an equivalent focal range of 23 - 483mm. It also carries an aperture range of f/2.8 to f/5.9, which is quite fast for a point and shoot camera, and will help you capture better results indoors. Although Samsung has included a 4x digital zoom with the WB850F, it's probably not a feature you're ever really going to need. With the 21x optical zoom, trying to add to it with digital zoom probably won't be worth the loss in image quality that digital zoom causes.
With such a large zoom lens, it would be nice if Samsung had given the WB850F a strong zoom motor. However, this camera has a very sluggish zoom lens, and it doesn't move through its range as smoothly as I'd like to see. If you're trying to stop on a mid- to high-zoom range level, for example, you're going to have a difficult time making the WB850F lens stop accurately, as the zoom goes from 13.9x to 17.8x to 21x, without stopping in between.
In addition, you may miss some spontaneous photos because of the sluggish nature of the zoom lens. For example, if you're shooting at a sporting event where you're trying to shoot close-up photos along with some telephoto shots, you may miss a few shots as you're waiting for the zoom to move through its range. The zoom is frozen in place for a second or two after you shoot a photo, which is a frustrating situation.
Samsung included a TTL (through the lens) focusing mechanism, with several different autofocus modes, including center AF, multi AF, and face recognition AF. You'll be able to make use of a dual image stabilization feature with the WB850F, which helps you avoid camera shake.
Effective AF range:


Samsung included a very nice pop-up flash unit with the WB850F. You press a toggle switch on the top panel of the camera to activate the flash. Although it would be a bit nicer if the flash unit popped up automatically anytime it was needed, this flash unit works pretty well. It has a range when shooting wide-angle photos of 1 to 11 feet (0.3 to 3.35 meters) and a range with telephoto usage of 1.6 to 6 feet (0.5 to 1.85 meters).
There are several flash modes available with the WB850F, including Auto, Auto & Red-eye Reduction, Fill-in Flash, Slow Sync, Red-eye Fix, and Flash Off. When using the flash, you will notice that the recovery time is a bit slow, as the WB850F requires about four seconds to recharge.


The top panel of the WB850F contains quite a few different aspects of controlling the camera. On the left, you'll see the panel of the popup flash unit, as well as the toggle switch for the flash. The power button is toward the middle of the top panel, and it's surrounded by a blue light that indicates when the camera is powered up.
The shutter button is toward the right of the panel, and the zoom ring surrounds the shutter button. Finally, the mode dial, which provides access to a large number of the camera's functions, is on the far right side of the top panel. Also pictured us the Left and Right stereo microphones.

Eight options are available on the mode dial. As you spin the dial, the mode that's adjacent to the white dot becomes the active mode. Smart Auto (marked in blue) is Samsung's primary automatic mode, while the P (Program) and ASM (Aperture Priority/Shutter Priority/Manual) modes provide the largest number of manual setting options.
The display screen on the WB850F camera is another great feature. It's a 3.0-inch screen with 921,000 pixels of resolution, and the images are sharp and bright on this screen thanks to AMOLED technology. AMOLED (short for active matrix organic light emitting diode) technology can create greater contrast, brighter light, and better viewing angles than traditional LCD technology.
You can select up to three brightness settings with the display screen -- dark, normal, or bright -- or you can leave the camera in automatic mode, and the WB850F will adjust the display brightness itself, based on external lighting conditions.

The control buttons for the WB850F are on the right side of the back panel of the camera. At the top of the panel is a red button for shooting movies. Surrounding the dedicated movie button is a Drive Speed switch, which allows you to quickly pick among the WB850F's burst modes, which include 3fps, 5fps, and 10fps, along with a Bracket mode and a Precapture mode. I don't believe I've ever seen a dedicated switch for moving among burst modes on a point and shoot camera before, so this is a great feature for someone who wants to frequently shoot in burst mode.
Just below are the Menu and Function (Fn) buttons. The Menu button provides access to all of the camera's menus, which will change slightly, depending on which shooting mode you're using. The Fn button gives you quick access to the primary shooting controls of the WB850, including flash, resolution, and burst mode. The controls that are available differ, depending on the shooting mode you're using. Just above the Fn mode is a small green light that lights solidly when proper autofocus is achieved and that flashes while the camera recharges after a shot and that flashes when the WB850F is in "sleep" mode.
The four-way button includes a Disp button, a self-timer feature, and a button for controlling the GPS. The four-way button is more of a ring that the photographer can spin to move quickly through menus or through thumbnails of photos. The camera's OK button is in the middle of the four-way button.
At the bottom of the control panel are the standard Playback and Delete buttons.

On the right hand side of the WB850F (as you're holding the camera) is a small panel that hides the micro-USB and HDMI ports. This is a sturdy, all plastic door that works on a hinge and closes tightly. Like with most point and shoot cameras, Samsung didn't include an HDMI cable with this camera's kit.

On the bottom panel of the camera is the battery and memory card slot. These slots are protected by a hinged, all-plastic door that's on a spring. It also latches securely into place with a toggle switch, and it is a high-quality part, just like the rest of the WB850F's design. You can use SD, SDHC, or SDXC memory cards with this camera.

The WB850F makes use of a thin, standard-shaped rechargeable battery. I was pretty disappointed with the battery lifespan of this camera, as it only ran for an hour to two hours before needing a full recharge. Part of the power problem is all of the power-hungry features with the WB850F, including the large zoom lens, the high-quality AMOLED screen, the Wi-Fi capabilities, and the GPS unit. If you're going to be using any of the features regularly, such as reviewing images on the brightest screen setting, the battery life will be well below average. Perhaps Samsung would've been better served by adding a bit to the thickness of the camera, allowing for a thicker battery.
Samsung did not include a separate battery charger with the WB850F, which is a bit of a disappointment; especially in a camera that costs more than $350. You must charge the battery inside the camera with the USB cable and an adapter for the electrical outlet. This means you cannot use the camera while you're recharging a spare battery, which is unfortunate when combined with the WB850F's below average battery life. I'd definitely recommend having a second battery on hand.