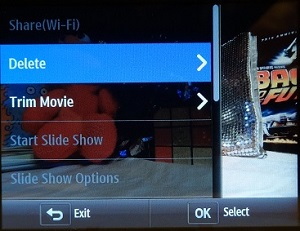 Please excuse the poor quality of these screen captures. The WB250F kit does not include an AV output cable, therefore we had to photograph the display screen.
Press the Playback button (marked with a Play icon as you might see on a DVD player) on the back of the camera to enter Playback mode and see the images and movies you've already shot.
When initially entering Playback mode, you'll only see the file number and battery charge across the top of the screen for the displayed image. In the lower left, touch the Menu button to open the Playback menu. To filter the visible images, press the checkerboard button in the lower right.
Press Disp on the top of the four-way button on the back of the camera to change the look of the display for the stored image. You'll see a histogram in the lower left corner and the settings for ISO, aperture, shutter speed, flash, resolution, and date shot along the right side. Press Disp again to remove all icons from the screen.
You can make use of the Index feature on the WB250F's Playback mode by pressing the zoom ring to the left with a single image on the screen. You'll see a 3x4 grid of thumbnail images. Use the four-way button to scroll through the thumbnails quickly and press OK to select a single image. Press the zoom ring to the left again to change to a 4x6 grid, and then press the zoom ring to the right to return to a 3x4 grid and then to a single image view.
With a single image on the screen, press the zoom ring to the right to open the Playback' mode's Zoom function. This allows you to magnify a portion of the stored image to make sure the focus is as sharp as you want. With the WB250F you also can use the Zoom function to mark a certain portion of the image for cropping.
Continue pressing the zoom ring to the right to increase the magnification and use the four-way button to adjust the portion of the overall image that you can see. You'll see a white rectangle in the upper right corner that represents the full image. The small white box in the middle represents the portion of the full image that you can currently see and its position relative to the full image.
The Playback menu on the Samsung WB250F gives you quite a few options for dealing with the images stored on the camera's memory card. As with the other menus on the WB250F, you can make your selections by touching the screen. The Playback menu is well organized.
If you do any editing of the stored images or movies through the Playback menu, the WB250F usually will make a copy of the original, just in case you later decide you preferred the photo before the editing.
You also can play stored movies using the Playback mode. With a video on the screen, you can touch the Play button in the middle of the screen to play the movie. Once a movie is playing, you'll see video control buttons across the bottom of the screen, such as pause or fast forward. Touch these buttons on the screen to activate them. If you pause the movie, you can then capture a still image of the scene by pressing the downward arrow on the four-way button, which is a nice feature.
During playback, you'll see a timing bar across the top of the screen that shows how much of the video has already played and the full length.
With a movie on the screen, you also can see data about the video file. The file number and battery charge is listed along the top of the screen. Press the Disp button on the back of the camera, and you'll see additional information, such as the date the video was shot and the resolution used. You also might see a histogram.
When recording a movie by pressing the video record button on the back of the WB250F, you'll see a red dot appear in the upper left corner of the screen, along with the amount of time the recording has been occurring. On the right side, you'll see the maximum amount of time a recording can last at the current resolution, as well as a resolution and audio icon on the far right. Press Disp to remove this data, leaving only the red record dot and the amount of time the video has been recording.