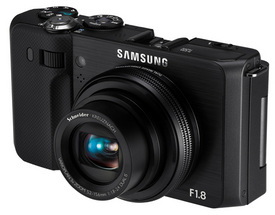 Samsung has created quite the competitor to Canon and Panasonic's "compact prosumer" type models, such as the PowerShot S95 and Lumix DMC-LX5. The Samsung TL500 (aka the EX1 in Europe) is a compact yet powerful digital camera that is packed with high-end features and plenty of exposure control. Some of its key features include a super fast f/1.8, 3x optical zoom lens (24 - 72mm equivalent), large 1/1.7" image sensor, 10-megapixels of resolution, a rotating 3.0-inch AMOLED display, durable metal body, creative controls, Li-ion power source, and loads of useful exposure modes.

While aimed more towards advanced users, the TL500 still offers plenty of user-friendly options, such as its Smart Auto mode. Smart Auto is now pretty much a standard feature on consumer digicams these days, which is great for the average user who has little photography knowledge, and just wants to snap nice pictures. This mode not only chooses accurate exposure settings, but it also analyzes the subject being framed and selects the best scene mode settings. This will help you produce more pleasing results in various environments. On top of Smart Auto, you can choose from 12 pre-programmed scene modes as well as 10 different Picture mode options (aka color modes).

For those who enjoy having more control over the exposure process, the TL500 delivers. This model offers varying degrees of manual control, from Program AE to full Manual mode. This will allow those with experience, and those who are learning, to explore their creativity by creating their own "look" to the photographs they capture. To help you quickly make changes to camera settings, Samsung has included a wealth of control shortcuts with well placed buttons and dials across the top and back of the camera, not to mention a handy Fn (Function) menu. There are also control wheels mounted on the back and front of the camera (similar to a dSLR), which control various camera settings depending on the mode currently in use. Overall, I found all of the controls to be placed in comfortable positions, and the enlarged hand grip on the right hand side of the camera was a very nice design touch. This makes holding the TL500 very comfortable, even for those of us with large hands.

The body itself has a good "heft" to it, which gives the TL500 a professional and well-built feel in your hands. Its mostly metal construction make this a pretty rugged camera, and the rubber accents around the grip and elsewhere offer you a secure, yet comfy grip. The onscreen menu system is laid out in a logical arrangement, allowing for simple navigation. The rotating 3.0-inch AMOLED display is a fine screen, that not only produces a clear live image with good contrast, but the display can also be rotated up to 270 degrees. This will allow you to easily frame shots that are much more difficult with fixed LCDs. I found the AMOLED screen on the TL500 worked well in various lighting, including outdoors in bright sunlight.

When comparing the TL500's image quality results to other cameras we've reviewed that share a similar 10-megapixel image sensor (like the S90 and S95), we were quite impressed. The TL500 captures beautiful images in various environments, which show true-to-life color balance, good overall exposure, and pleasing sharpness and contrast. I also noticed very little edge softness. The TL500's 3x optical zoom lens is also a fine unit, offering a nice wide range of approx 24-72mm (in 35mm equivalence). While not covering a broad range, the zoom on the TL500 will afford nice indoor photos and landscapes, while also allowing you to zoom in tightly for macro and individual type photographs. This is one of the fastest lenses we've seen on a consumer model, with a wide open aperture of f/1.8. This will help you capture images in marginal lighting that are just not possible with most other cameras on the market, without boosting the ISO to levels that are likely to produce images that are riddled with noise. Overall, The lens helped the camera capture sharp images through out the aperture and zoom ranges, with minimal aberrations and distortions.

Noise levels are very well controlled, all the way up to ISO 1600. This is no surprise, since we've already seen that these larger 1/1.7", 10-megapixel image sensors handle noise extremely well, helping you capture better photos in low-light situations. The maximum ISO 3200 setting did not produce images that look quite as good as those captured from the Canon S95, however if in a bind I think you could still get away with using this setting for prints (especially if shooting in RAW mode). One negative thing I found when reviewing our typical M&M man photos was with white balance. The TL500 seemed to produce images with a bit of a green tint to them, when using the Auto WB setting. The built-in, manual pop-up flash worked well when shooting subjects from a few feet away, however it lacks the power to illuminate open rooms. When using the mid to telephoto end of the zoom range, you will get the best results with subjects that are no more than 5 feet away. Luckily, the TL500 has a fast lens, and a hotshoe for an optional external flash unit.

One area where the TL500 lacks in is video mode. HD is pretty much an industry standard nowadays, with just about every new digicam (including most dSLRs) offering at least a 720p HD video capture mode. The TL500 on the other hand only offers VGA (640x480) and QVGA (320x240) capture modes, with audio. The frame rate is selectable from 15 to 30fps. Many will not see this as a downfall, as they are purchasing the TL500 for its photographic features, however it's worth nothing. The quality of the TL500's VGA video is quite good, and the camera performed well in lower lighting. Playback when using the 30fps option is nice and smooth. Like most digicams, the built-in microphone on the TL500 picks up a good deal of background noise, which you may not have noticed when shooting the movie.

Samsug's battery life claims seem fairly accurate. They note that the TL500 can capture about 240 images on a single charge. We were able to capture just over 200 still photos, record several short video clips, and conclude all of our other tests on a single charge. While this should be sufficient for a typical outing, many will want to pick up a second battery pack; especially if you have a vacation coming up. The SLB-11A battery pack that comes with the TL500 is charged in the camera using the supplied USB cable. You can either plug the cable into your PC/Mac, or use the AC converter supplied. Unfortunately, this means you can not charge one pack while using another, since the battery being charged has to be in the camera. This is a bit of a downfall in our eyes, however we did see that Samsung does show that they offer an external charger for the TL500/EX1 as an optional accessory.

Bottom line - Samsung has created a powerful camera that is sure to please those who are looking for a somewhat compact unit that offers superior image quality and features when compared to other models of its size. The TL500/EX1 is a worthy competitor in this "compact prosumer' category, with excellent shooting performance, pleasing image quality, and loads of other useful features. With a MSRP of $419.99 US, the TL500 is not cheap. However we feel it offers an excellent value for such a capable and well-built camera. It's also right in line with the price point set by its competitors.