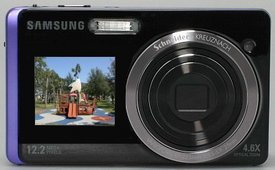 For 2009, Samsung has taken a unique approach with their TL series of ultra-compact digital cameras. The new TL225 is the first digicam we have ever seen that features "Dual" LCD screens (called DualView), with a monitor mounted right on the front of the camera, along with the typical display on the back that is used by the photographer. On top of this, the 3.5-inch unit on the back is a touchscreen LCD with incredibly high resolution at 1,152K pixels. Other notable features include 12-megapixels of resolution, a 4.6x wide angle zoom lens, dual image stabilization, Smart Auto exposure, and 720p HD video recording.

The TL225 continues the tradition of past TL series cameras, like the TL100, by offering the latest and greatest of features and technology, all wrapped up in a diminutive body. The TL225 measures a mere 3.93x2.35x0.73 inches, and weighs in at about a half a pound with the battery and memory card installed. The body of the camera also feels nice and durable, thanks to its partial metal construction. Carrying around the TL225 is a snap, as it was able to fit in the front or back pants pocket of my jeans without much fuss. Because this model uses a touchscreen system to control the camera, there are virtually no camera controls on the body, with the exception of a small play mode button on the top leading edge along with the power button, shutter release, and a small zoom lever. The entire back of the camera is dominated by an impressive 3.5-inch touchscreen LCD. This display features some of the highest resolution specs I've seen on a digicam, with over 1-megapixel of resolution (1,152K or 1,152,000 pixels). That's over double the amount of pixels seen on today's high-end, 460k dot, 3-inch or larger displays. The TL225's main LCD offers an amazingly clear, bright, and sharp picture, and worked well in almost any lighting condition. In marginal lighting, the display gains up well with very little "grain". When shooting in bright conditions, there are still a few angles which reflect the light, however they never caused any issues when using the camera.

The menu system and touch controls are laid out rather well, allowing for quick and easy changes to various camera settings. I found the touchscreen system was very precise, tracking the input from my large fingers without any problems. Another notable feature on the TL225 is Motion Recognition. When using the camera, in either Record or Playback mode, there is a small icon on the right that sits in a prefect position to be pressed and held by your thumb. When you do this, a graphical menu appears, and depending on which way you tilt or twist the camera, will determine which record or playback mode is selected. This is a very handy feature that allowed me to quick switch between Smart Auto, Program, and Movie mode with a simple twist of my wrist. You can also tilt the camera in playback mode at any time to quickly search though images. Tipping it "left" will scroll backwards through your stored files, while tipping it "right" goes forward. The only issue I had with the TL225's touch system was on a few occasions, the camera simply locked up or froze after I tried to activate a menu option, etc. This caused me to have to manually hard boot the camera (by pulling out the battery). Pressing the power button, or any other control for that matter, did nothing at all.

When testing the TL225, we found that it was a responsive little camera. From start up to first image captured was just 2 seconds. When pre-focused the shutter lag, the time it takes to capture an image after you have fully depressed the shutter release, averaged about 1/10 of a second, or 2/10 - 6/10 of a second when including the Autofocus and Scene recognition systems. The shot to shot delay was a little slower at about 3 seconds between frames without the flash, or about 4 seconds with the flash on. There are two burst capture modes on this camera (Continuous and Motion Capture) as well as Auto Exposure Bracketing (AEB). Using continuous mode I was able to capture 10 full size images in 9.7 seconds (a bit faster tan 1fps). Motion capture mode shoots at VGA resolution (640x480), and using it I captured 30 images in just 4.5 seconds (6.7fps). During standard Continuous capture, the LCD screen blacks out after the first frame, then quickly displays the last image captured for each additional shot. This makes it hard to follow your subject while shooting. Motion Capture reminds me of movie mode, but saves each frame separately. When using it, the live image does not black out or pause, However a "capturing" box is displayed on the screen which totally blocks your subject, so following your subject is almost impossible with the LCD. All tests were done using a PNY 4GB Micro SDHC memory card, Smart mode, ISO Auto, quality/size set at 12M Superfine, flash off, quick view off and all other settings at default (unless otherwise noted.) Times may vary depending on lighting conditions, camera settings, media, etc.

The TL225 is equiped with a Schneider-KREUZNACH 4.6x optical zoom lens, which covers an equivalent range of 27 - 124.2mm (in 35mm equivalence). This affords a nice wide zoom range that will allow for nice indoor snap shots, while still offering decent magnification for tighter framing. Overall this lens helped the TL225 produce clear photos throughout the zoom range, with only moderate barrel distortion at the wide angle extreme, and only slight traces of other aberrations present.

I was very pleased with our image quality results when using the camera's Smart Auto exposure mode. It was able to consistently capture sharp images both indoors and out, with excellent exposure. Outdoors the camera captures beautiful images with nice sky detail and very little edge softness. The flash did well indoors, thanks to Smart Auto boosting the ISO slightly to extend the coverage. One thing I did notice though, there were several instances where the camera would Not use the flash when I wanted it to or thought it need to in Smart mode. These images then ended up being a bit soft, or even blurred at times, due to the subject moving. There were also several instances of Red-eye in our people photos, which means you will have to correct these photos later on your PC/Mas since the TL225 does not have a red-eye fix option in playback.

As mention above, this is the first DualView camera we have ever seen. Samsung has mounted a small 1.5-inch LCD on the front of the camera, which is protected by the clear plastic shell that covers the entire front of the body. No more guessing when taking self-portraits or snapshots with your friends. You simply touch the monitor Icon on the main LCD, and turn the front display on. Then you, or your subject, will get a nice view of what is being framed. This allowed us to capture much better self-portraits and small group shots, using the one-handed, self-shot method. Overall, our portrait style photos turned out very nice, with good illumination from the flash on the subject, sharp facial details, and accurate skin tones. The scene recognition system was also fast and accurate, producing pleasing results in a variety of shooting situations (portraits, macro, landscapes, etc.)

The TL225 seemed to handle noise better than it's predecessors. The camera produces usable photos for large prints without a problem up to ISO 400. At ISO 800, you will start to see some detail loss from the NR (noise reduction) system, however these images are still quite usable. I was surprised that ISO 1600 looks as good as it does in our M&M man shots, capturing an image that is clean enough for small prints; at 100%, you can definitely see the loss of detail. ISO 3200 looks horrible, and I don't recommend using it at all.

Movie mode allows you to capture to capture video clips at 1280x720 (720p), 640x480, and 320x240 resolutions with frame rates of 15 or 30fps (QVGA mode can also do 60fps). Unlike most digicams, the TL225 does allow full use of the optical zoom while recording a video (something most Samsung models offer). The OIS (optical image stabilizer) is also available in movie mode, which will help you capture more steadier hand-held clips. Our movie mode results were good, with average amounts of noise. They play back smoothly on the camera or your TV set, just be sure you have a fast PC or Mac if you plan on playing the HD video files on your computer. The camera captures decent audio as well, however when you use the optical zoom, the video will go silent while you are zooming. I'm guessing this is to combat the loud sounds that is made by the zoom mechanism.

The TL225's battery life was good for such a compact digicam, depending on how often you use the front LCD. We were able to capture a total of almost 400 photos (including several short videos), however that was with two full charges from the cameras battery. We used the DualView mode often, so I suspect one could get better PPC (Pictures Per Charge) if you used the front LCD less, but where's the fun in that. Yet another cool feature with this camera was the fact that Smart Auto would suppress (turn off) the flash when the battery was low, allowing you to get as many shots as possible before running out of juice. Like many models on the market today, the TL225 charges the battery in-camera, using the supplied USB cable. This has advantages, and disadvantages though. While this means you can charge the camera from almost anywhere, provided you have either an AC outlet or powered USB port near by. However, it also means you can not charge a second pack while using the camera, making it difficult to have a spare pack charged and ready.

Bottom line - Samsung has really hit a home run with this clever compact digicam. With the new DualView feature, you can now rest assured that your self-snapshots will be framed properly, and with the camera's affective Smart Auto, your photos will be sharp and properly exposed. The only issues I had with this camera was the locking up problem, red-eye in our people photos, and sometimes the Smart Auto choose Not to use the flash when it should. With a MSRP of $299, this is not the cheapest 12-megapixel model out there. However, it does offer a great value when you consider the versatility it offers with DualView, not to mention is packed full of the latest technologies (OIS, Smart Auto with Scene recondition, etc.) and features like a huge 3.5-inch LCD.