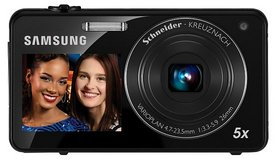 Samsung continues to create appealing point-n-shoot models, like their newer ST700. This camera builds on their Dual View line, offering a nice large 3.0-inch touch screen LCD on the back of the camera, along with a small 1.8-inch screen mounted on the front. This allows you to easily frame yourself for self portraits, or get shots with your friends without having to guess on the framing when holding the camera in one hand and pointing it towards you. Other important features include 16-megapixels of resolution, a wide 5x optical zoom lens, 720p HD video capture, Smart Auto 2.0, Magic Frame options, and various photo and video filters. Combined, these options give the ST700 quite the appeal to a wide variety of users.

Samsung has taken an already small camera (the ST600) and made it even smaller. The ST700 measures just 3.88x2.17x0.78 inches (WxHxD), and weighs just 4.3 ounces. This size allows you to carry the camera with you at all times, whether in your pocket or handbag; no more excuses as to why you don't have your camera with you! Samsung has taken a new route with their GUI (Graphical User Interface), with an App driven system that is very similar to modern day smart phones, like iPhones and an Android powered devices. This is a pretty handy system, that the younger masses are sure to pick up on quickly. It also simplifies the operation of the camera, considering that all of the options are fully automatic. You have various color photo and video filters to apply, along with Smart Auto still and Smart Movie options. These settings not only apply the proper exposure settings to your shot, but they also analyze the subject to apply specific scene settings to help the create an even better photo or video. The Photo Filter app is probably the "funnest" part of the camera. Here you can apply various filter effects to your photo, and you can see the effects real-time before you actually capture the image. We attended a civil war reenactment, and found the Old Film settings to be a blast to use, capturing antique looking shots of the actors and actresses that were dressed in the colonial drag. These settings really add to the enjoyment factor of the ST700.

The ST700's 3.0-inch touch screen display controls 95% of the camera's functions, with only a few small buttons left on the top and back; buttons for Power, the Front LCD, Home, and the shutter release with the zoom control mounted around it. These are placed in comfortable positions, and we only really had problems with the Power button. It's location and sensitivity make it very easy to accidentally turn on the camera. The Front LCD button turns the front LCD on and off, and can also power up the camera with the Front LCD on for a quick self-portrait or snap shot with a friend.

Since there are no other buttons or controls on the camera, this means you'll be using the rear display for most all other inputs, which uses a resistive type touch screen system that responds to pressure inputs. Due to the Android powered smart phones I use on a daily basis, I'm use to the capacitive type display that requires you to touch the screen with the "meat" of your finger. Because of this, at first I thought the touch screen on the ST700 was slow and not accurate. However, once I figured out that it was a resistive display that responds better to my finger nail or a pen, rather than the flesh of my finger, I found it was a very responsive system. So, if you're use to you capacitive device, the first time you use the ST700 you might experience similar concerns. Both the rear and front LCD screens worked well in various lighting conditions, however due to their reflective surfaces you will get a few angles which reflect bright light. While I never noted any actually issues when shooting in bright sunlight, it is nice to know that there are several display brightness options you can choose in the Settings app; the default is Auto, which we found worked fine during our tests.

Like the majority of Samsung's compact cameras, the ST700 has an angled base, which points the camera upwards when set on a flat surface. This makes it easier to frame shots then using the self timer to get a group shot when no one is around to snap the photo for you; and thanks to the front LCD and the wide angle of the lens, you can make sure everyone will be in the frame.

Samsung has upped the ante in terms of resolution on the ST700, jumping from 14-megapixels to 16-megapixels when compared to its predecessor. This gives you quite a bit more flexibility in framing and cropping, with more surface area to work with. Image quality is comparable to most compact point-n-shoots, with the camera producing pleasing exposures that show good color saturation and sharpness. When critically viewing images at 100%, you can see some edge softness on the left and right sides of the frame at the wide end of the zoom, along with some chroma and luminous noise. This is quite typical, and it's not likely to show up on your small to mid sized prints (4x6s and 8x10s). The camera's 5x optical zoom covers a nice wide 35mm equivalent range of approx. 26-130mm. This wider range is ideal for taking photos indoors, along with nice wide landscape type photos. The 130mm end of the zoom will help you tightly frame yourself or others for portrait type shots, and it will help bring subjects a bit closer; just don't expect to zoom across the basketball court or football field. Overall the lens helps the camera produce sharp images throughout the zoom range, with minimal aberrations.

Moving indoors, you'll have to battle a common issue; poor lighting. While the ST700's Smart Auto system helps increase the brightness of your photos, and you have a built-in flash, the two combined won't always produce the best results in a dimly lit room. The flash is rather weak, which is common with ultra-compact digicams. I found the flash had enough power to illuminate a subject from four or five feet away indoors, leaving a very dark background. Still, the camera can capture some decent photos indoors, which are comparable to similarly equipped cameras on the market.

Video quality is also average for a 2011 digital camera. The camera still records at only 720p (1280x720), which is pretty much a standard offering nowadays, with full 1080p slowly becoming the new standard. You can choose from 1280x720 HQ, 1280x720, 640x480, 320x240, or a new 220x176 (Front LCD) resolution. Mono sounds is recorded, and you can choose frame rates of 30 or 15fps. Video is saved using the MPEG-4 (.MP4) file format. Unlike most digicams, the ST700 does allow you to use the optical zoom while recording. The only negative about zooming in a movie is that sound recording stops while the lens is moving. So, your video will be silent for a brief moment while you adjust the focal length. Like we mentioned earlier, the ST700 offers Samsung's Smart Movie mode option where the camera acts much like it would in still mode. The camera analyzes the scene at hand, then chooses from four Scene settings (Landscape, Sunset, Clear skies, Forested areas) that best fit the subject. Overall, the quality of our video is decent. The camera handles exposure well, and the AF system did a pretty good job of keeping subjects in focus; even when zooming. Audio is average at best, with the microphone picking up a great deal of background noise, along with wind noise. Either way, the camera can capture usable video for sharing with friends and family on your PC or TV with optional cables, as well as YouTube.

Like the ST600, the ST700 only boasts a battery life of up to 180 frames on a single charge. This is sub standard when compared to the competition, with the average consumer point-n-shoot offering battery life sufficient for 230-250 photos per charge. We captured over 200 photos an dozens of 720p HQ video, however we did require a recharge to complete our tests. Like most of Samsung's cameras, the ST700 charges batteries in-camera using the USB cable, meaning you can quickly charge the camera on the go as long as you have the cord and a standard USB port near by. Albeit, using the AC adapter will charge the pack much faster. The only downfall of this type of setup verses an external battery charger is that you can't charge up a spare pack while you're using another in the camera. We still highly recommend you snag a spare battery if your budget allows, especially if you are planning on taking the ST700 on vacation.

Bottom line - Samsung seems to have the Dual View market cornered. These unique models offer a great deal of appeal with features that fit the needs of a wide variety of users; especially for the younger masses. Overall, we enjoyed using the ST700. This model offers competitive image quality and shooting performance, loads of fun exposure modes and filters, along with a competitive price tag of $279 USD or less.