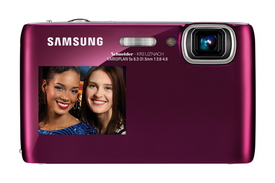 The ST100 is one of many Dual View cameras offered by Samsung, who is the pioneer of this awesome technology. The most compact Dual View camera we've tested, the ST100 is packed with some very impressive features, many of which it shares with the ST600. These include 14-megapixels of resolution, an awesome 3.5-inch Touchscreen LCD with over 1 million dots of resolution, a 1.8-inch front facing LCD, an internal 5x optical zoom lens, 720p HD video capture, Smart Auto 2.0, and an advanced face detection and recognition system that can store up to 20 faces. The ST100 is an ultra-compact camera that is available in four stylish colors (Black, Purple, Blue, and Gold), all of which offer a mirror-like, glossy finish.

If you're looking for a pocket camera, the ST100 will fit the bill. This unit measures a scant 3.9x2.3x0.78 inches (100x60x20mm) and weighs just 4.8 ounces (without card or battery). Thanks to its sleek design and internal zoom lens, there' nothing that protrudes from the camera, and you don't have to worry about an extending lens. While small, the camera fits well in your hand using the pinch technique, and the controls on the top are within reach of your fingertips. Being a touchscreen camera, you only have five controls on the body with buttons for Front LCD mode, Power, Shutter, Playback, and the zoom switch. Samsung chose to use a rocker type switch for the zoom controls, rather than a unit mounted around the shutter release. While the latter type of unit is favored by our staff, the setup on the ST100 still allowed for effortless changes in focal length.

As with past models, like the ST80 for instance, the ST100 offers a unique base setup that allows the camera to sit at an angle for better group shots when using the self-timer or other camera options. However, Samsung has also added some normal "feet" to the base, which allow the camera to sit level now as well. This is a very welcomed addition, at least for us, as now the camera can sit nice and level, or you simply tilt it back until the rear feet touch to invoke an upward angle.

Like mentioned earlier, the ST100 incorporates an impressive 3.5-inch touchscreen LCD that boasts over 1 million pixels or dots; 1,152,000 to be exact. This is one of the most resolute screens we've seen, which made its first appearance on their TL225 from 2009. With over double, if not triple, the resolution found on typical LCDs, this display is able to offer an excellent live image with good contrast and color reproduction. The display is easy to see in most all lighting, thanks to a bright backlight that gains up well in marginal conditions. When shooting in low light you don't get that graininess you see with most LCDs, however you will see some chroma looking noise (small blocks of blue and red). They are very faint, and you have to be in some very dim lighting to see them. The coating is quite reflective, however when the camera was on I never really had an issue with seeing my subject, even outdoors in bright sunlight.

Samsung's touchscreen GUI hasn't changed much since past models as far as layout is concerned. Everything is logically placed, and you have two slide away shortcut trays that allow you to quickly pull up common settings, then clear the screen by "closing" the trays. The ST100 retains the handy Motion Recognition feature, which allows you to quickly access specific camera modes by touching a small icon on the screen and tilting or twisting the camera. You can also tilt the camera in playback mode at any time to quickly search though images. Tipping it "left" will scroll backwards through your stored files, while tipping it "right" goes forward. One thing I noticed about the screen was it only responds to the touch of the flesh of your fingertips, and not a fingernail. This could be a nuance to some, especially those with long fingernails. Overall, the touchscreen system was very responsive to our inputs, and a pleasure to use; which is no surprise when you consider Samsung's display history.

The ST100 offers a larger front LCD screen than past models, with a 1.8-inch monitor that offers 116k pixels. This gives a much better and larger picture when holding the camera a few feet away. Moving from a 1.5-inch display to a 1.8-inch may not seem like much, but it's very noticeable. We tested the Black ST100, and when the front display was turned off, it was hard to even see that there's a screen underneath the plastic protective shell that encases the front of the camera. This screen is a great asset to the camera, providing a viewfinder for you to use while capturing photos with your friends, or of yourself. Samsung also added various Front LCD modes to choose from, to help you get the attention of babies with cute pictures and sounds, as well as a smile detection setting that will automatically capture an image or images without you having to press the shutter release. These include, On (turn the display on), Self-shot, Couple-Shot, Jump-Shot, Function Info, and Smile shot. You can even tap the front screen to turn in on, which then locks the rear screen so you don't accidentally change a setting while doing a self-portrait. Overall, this functionality and these creative options enhance the appeal and versatility of this camera. Teenagers and adults alike can be seen on a regular basis taking couple shots with their friends or self-portraits while holding the camera in one hand and guessing on the framing as they point the camera at themselves, hoping for a good shot. With the Dual View option of the ST100, you're guaranteed to get great shots all the time since you can actually see yourself. Just be sure to look at the lens once you've framed your shot, otherwise you'll notice that your eyes are looking off to the left.

The overall image quality from the ST100 is great for a 14-megapixel ultra-compact digicam. Like many new cameras today, the ST100's Smart Auto (2.0) mode produces images that are very pleasing to the eye, with increased saturation that makes colors really stand out. While this is appealing to the eyes, sometimes colors are not always natural. For the most part, images are sharp with good contrast. If you zoom in to 100% (aka pixel peeping), you will see a bit of edge softness along the edges, due to the lens. Speaking of the lens, the ST100's internal unit performed well other than some typical distortions (like the edge sharpness we mentioned above as well as some chromatic aberrations). It offers an equivalent focal range of 35-105mm, which is not every wide by today's standards, where most cameras are offering wider viewing angles from 24-28m. The 35mm wide angle extreme will limit your framing abilities both indoors and out, as you may find yourself zooming with your feet in order to get that wise landscape or group shot. Indoors this can cause problems when in small to mid-sized rooms. On the other hand, the 175mm telephoto magnification is great for tightly framing subjects for close-up or portrait photography; just don't expect to be zooming across a football field. One thing we'd like to point out is the lens' position. Being in the upper right hand side on the front of the camera, it's very easy to block a portion of the lens with the finger tips from your left hand.

When shooting people photos with the ST100, I found the front LCD was very useful when trying to get some nice shots of our children, since they seemed to pay more attention and sit still due to being able to see themselves in the screen. This also lead to some silly faces as time progressed. The flash works well when the ISO is set to Auto, however you have to understand that it's such a small unit that coverage is not going to be great. If you are trying to illuminate open rooms, or shoot across a room, it's likely your photo will either be dark, or show excessive noise from the camera spiking the ISO in order to try and illuminate your subject. Keeping your subjects less than 8 feet away or so, should give you the best results. One annoyance you may encounter with the ST100 is red-eye. Most of the photos we captured of our kids showed red-eye, and this was when using the Smart Flash mode setting, which should compensate for red-eye. Unfortunately, there is not any type of in-camera red-eye removal function in playback mode.

The video options on the ST100 are pretty standard. You can shoot movies at 720p (1280x720, 30fps), VGA (640x480) or QVGA (320x240) resolutions, with a frame rate of 30 or 15fps. These movies are saved using the MPEG-4 (.MP4) file format. Unlike many cameras, you have full use of the optical zoom while recording. The zoom moves slowly to keep the noise down, and the AF system works rather quickly to keep everything in focus. Another unique feature is Smart Movie mode. Here the camera acts much like it would in Smart Auto, by analyzing the scene being recorded and adjusting settings to help you capture more pleasing video. From looking over our video results, the ST100 captures decent HD video for a compact camera. It will look ok on your HDTV or computer screen, just don't expect it to rival that of a HD camcorder.

Battery life is pretty average for an ultra-compact. The included Li-ion battery pack will give you enough power for about 200-250 frames, depending on how often you use the flash or the amount of time you spend in playback mode. The battery is charged inside the camera by using the USB cable and the included AC adapter. You can also charge the camera from a standard USB port on your PC, etc. This makes it simple to top off the battery. The only downside to internal charging is that you can't have a spare pack charging while your using the camera.

Bottom line - we all enjoyed using the ST100. The kids and wives especially like the Dual View features of this one, and it offers good image quality and acceptable performance to boot. While our cons list may look like there were several problems with the camera, each was only a minor "negative check mark". With a price tag of approx. $329.99 US or less, the ST100 offers a great value for the features and quality you are receiving, not to mention that it's one of only a handful of cameras on the market that offer the Dual View technology.