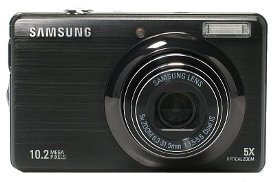 For 2009, Samsung has several compact digicam offerings, including the SL420. Holding the "mid-level" spot, the SL420 boasts some appealing features, which include a 10-megapixel image sensor, 5x optical zoom lens, 40MB of internal memory, a 2.7-inch LCD, and a Li-ion power source. All of these features are packed into a nice compact shell that is offered in four colors. Designed to be simple to use, the SL420 offers a user-friendly interface along with several fully automatic exposure modes. One of these being Smart Auto, which is an intelligent exposure mode that analyzes the subject being framed, then chooses the best Scene mode settings for the shot.

The SL420 is very compact, measuring just 3.7x2.3x0.93 inches. I had no problem carrying this camera around for the day while out taking our sample pictures. The LCD is nice and bright, and I didn't have an issues seeing my subject in both bright or marginal lighting. The only things I would have liked to have seen on the protective cover on the back (which covers the LCD and surrounds the controls on the back) would have been both a non-glare and scratch-resistant coating. There were many angles with reflect bright direct light, and I found it very easy to scratch the surface of this screen. The various camera controls are all placed in a comfortable position. The zoom controls took me a little getting use to, as they are mounted on the back next to where your right thumb rests, and use a Up/Down motion. I personally like the controls that are mounted around the shutter release on these compact digicams, much like Samsung did with the TL100. As mentioned above, the menu is easy to navigate. All of the various options are separated in four main categories (Functions, Sound, Display, Settings). Like we saw on the TL100, the Function menu option is a bit weird. When scrolling through the available options, you are in the full menu system with the normal background image. However, once you've selected a setting to be changed, it pulls up the live image, and now it looks much like a shortcut menu. This "menu jumping" didn't affect camera operation much, I just found it to be a bit odd and unnecessary.

The SL420 performed well during our shooting performance tests. From start up to first image captured measured just 2.1 seconds. When pre-focused the shutter lag was less than 1/10 of a second and between 3/10 - 7/10 of a second when including the Autofocus system, depending on the degree of focus change required. The shot to shot delay in single exposure mode was around 1.5 - 1.7 seconds between frames without using the flash and just under 2.5 seconds with the flash. This was with "Quick View" turned off; enabling this feature on the shortest setting added about a half a second to these times. There are two burst capture modes on this camera (Continuous and Motion Capture) as well as Auto Exposure Bracketing (AEB). These functions can only be accessed when using the Program exposure option. Using continuous mode I was able to capture 8 full size images in 11.2 seconds (less than 1fps). This is barely faster than using single drive mode, lacking far behind other models in this class. Motion capture mode shoots at VGA resolution (640x480), and using it I captured 30 images in just 4.6 seconds. During standard Continuous capture, the LCD screen blacks out after the first frame, then quickly displays the last image captured for each additional shot. This makes it hard to follow your subject while shooting. Motion Capture posts up a Capturing message with a huge grey square surrounding it, which totally blocks your view of anything you are trying to record. This was a big mistake on Samsung's behalf as that simple indicator makes the Motion Capture feature almost useless, unless you have the camera on a tripod, and you have your non-moving subject in a stationary position (Like a golfer getting ready to tee off). All tests were done using a SanDisk Extreme III 1GB SD memory card, Auto and Program modes, ISO Auto, quality/size set at 10M Superfine, flash off, quick view off and all other settings at default (unless otherwise noted.) Times may vary depending on lighting conditions, camera settings, media, etc.

The Sl420's image quality results rival that of cameras in it's class, and higher. The camera produces tack sharp images throughout the zoom and aperture ranges, with little to no edge softness. Exposure is spot on most of the time, and the level of contrast is very appealing, giving photos a sharp, crisp look. There were a few instances where the Smart Auto mode would produce a slightly overexposed image, which also caused colors to be a bit more saturated. These images still look good, however they aren't exactly natural looking. You can see an example on our sample photos page, where we shot our normal canon subject in both Smart Auto and then Program. We used Smart Auto for all of our shooting, and it did an excellent job 95% of the time. The camera was able to quickly recognize the scene being framed, and choose the proper settings almost instantly (no camera slowdown was noticed). Other than the occasional bright image, I found Smart Auto to be the best choice when out shooting with this camera. If you want to keep it simple, don't ever worry about moving the mode dial. However, if you want access to the burst mode and bracketing functions, as well as other exposure options, Program will be your best bet.

Indoors the camera also performed well, however I found using Program mode produced the best results. This is because the Smart Auto mode does tend to bump up the ISO, which does produce a brighter, better looking image. However, because of the higher sensitivity, image noise is more noticeable. Again, on our samples page you will find an example of our portrait subject being captured with both Smart Auto and Program (ISO set to 80). Each will produce very nice 4x6-inch or larger photos, however the Smart Auto example will show traces of imager noise on large prints. The flash also performed quite well for such a small camera. I had no problems illuminating our portrait subjects from about 6-7 feet away as well as lighting our M&M man test subject from about the same distance. When shooting a macro shot, the SL420 controlled the flash's output nicely, ensuring you don't overexpose a close-up subject. See our candy dish shot on the samples page to see for yourself.

Like we mentioned above, the SL420 has been equipped with a nice 5x optical zoom lens, which covers an equivalent range of apporx. 35-175mm. This will afford more framing options than you would be able to accomplish with a typical 3x zoom, and because it favors the telephoto end, will bring distant subjects much closer too. Indoors you might find that the 35mm wide angle extreme is a bit narrow when trying to shoot a group of your friends. Overall, this is a very nice lens that complements the SL420 nicely, exhibiting moderate barrel distortion at wide angle along with average traces of chromatic aberrations (aka purple fringing or purple lines along subjects with extreme contrast).

Image noise is well controlled for a point-n-shoot model, up to a recommended maximum setting of ISO 800. While there are higher settings available, I found that ISO 800 was the cut off if you plan on making any type of usable prints. While noise starts to be present as low as ISO 200, from there on up to 800, I feel images still look pretty good. While you can see speckling when viewing an image at 100%, image detail and sharpness is not compromised as much as we typically see, making these images good candidates for prints. If you are using Smart Auto for all of your shooting needs, rest assured that it does a good job of keeping the sensitivity down, as the highest setting I saw the choose was ISO 400 during our testing.

The included Li-ion battery offered good shot life for a camera of this size. Samsung claims this 1050mAh pack can power the SL420 for up to 320 shots on a full charge. I was able to capture all of our test photos (over 100 shots) as well as finish all of our other tests with 2 out of 3 bars left on the battery meter. Unlike most digicams these days that us an external AC charger, or a proprietary unit that charges the battery in the camera, the SL420 uses the USB cable. While there is an included AC adapter that you can plug the USB cable into, you can also use your PC. This offers great versatility, as you can charge the camera just about anywhere without having to carry anything with you but the USB cable. The only downfall to this is that you can not charge a second pack as a backup while you are using the camera.

Bottom line - Samsung has put together a very appealing package with the SL420. This camera offers excellent image quality, that rivals that of more expensive cameras, along with good performance, pleasing ISO performance up to ISO 800, and a capable Smart Auto exposure mode. I feel this camera will make a great choice for a youth or adult user who is in the market for an easy to operate, yet capable, compact digicam. With a street price of $179 or less ($139 at several of our online vendors below), the Samsung SL420 offers an outstanding value, and I have no problem giving this camera a high recommendation.