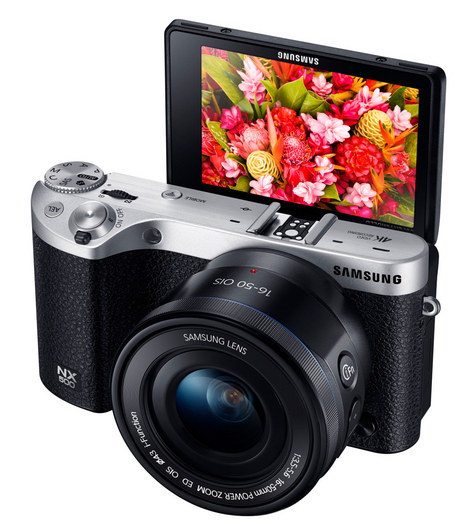 Samsung's newest NX-series ILC, the NX500 is a powerful, yet compact mirrorless interchangeable lens camera that boasts some impressive specifications. First and foremost is the camera's new 28-megapixel BSI (Back Side Illuminated) CMOS image sensor, which measures 23.5x15.7mm (APS-C sized).
They are claiming that the NX500 harnesses the, "core functionality of the NX1", their flagship ILC, "engineered into a portable and convenient size.". Some of these core features include a speedy DRIMeV image processor, their NX AF III autofocus system, and 4K and UHD video recording capabilities.
They've also updated the NX500 with enhanced sharing capabilities, thanks to updated Wi-Fi, NFC, and Bluetooth connectivity. Lastly, for you selfie lovers, Samsung has included a 3-inch Super AMOLED touch screen display that tilts and flips.
Samsung NX500 features:
The Samsung NX500 is in Black, White, or Brown, with a suggested retail price of $799.99 with a 16-50mm Power Zoom lens. See our best price box at the top right of this page for current online pricing at various retailers.