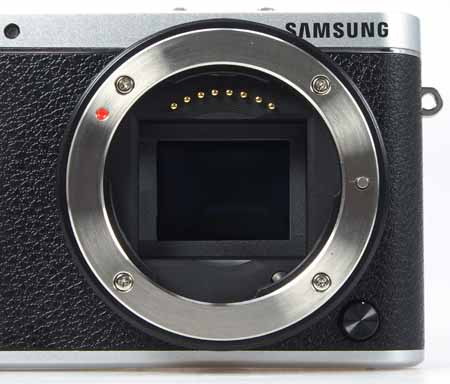 The NX lens mount accommodates the company's NX series lenses. You also can get a K-mount adapter for mounting K-series lenses.

If the lens offers it, optical image stabilization can be used. The 16-50mm kit lens we tested includes this feature. The camera does not have a dust-reduction feature.


The kit lens included with the camera is a 16-50mm lens employing optical image stabilization.

The camera body is quite compact, officially measuring 4.62 x 2.59 x 1.54 inches (1.06 inch). This last duplicate measurement takes into account the thickest and thinnest depths of the camera. So, from the very back of the LCD to the front of the lens mount it measures roughly 1.5 inches, but the hand grip to the control panel (which is slightly recessed from the LCD), the body is roughly 1.25 inches deep.

The camera weighs just half a pound without the battery and memory card (not that you'd feel the difference with a microSD card installed).


To entice the selfie generation, the LCD flips up, allowing you to use the screen to frame your self portraits. When angled upward at a more modest angle, it's good for taking shots while holding the camera low, particularly low to the ground.

The TFT-LCD is bright and crisp, with a resolution of 460,800 dots. Although the LCD folds 180 degrees upward, it does not swivel or fold downward for more inventive angles. So, for example, it won't help you frame shots more easily while holding the camera overhead.

At top of the back panel is the video record button. Below it are four buttons surrounding a four-way control and thumb dial the company calls a "smart dial". The four buttons perform familiar functions corresponding to their labeling (clockwise from top left): Menu, Fn, custom/trash, and playback. In shooting mode, the custom button can be assigned one of six functions (such as auto exposure lock), but you'll have to go to the user settings menu and select "key mapping" to do so. You'll need to do this in PASM - in other modes, such as Auto or Smart mode, the contextual menu doesn't include key mapping.

The top of the camera is where you'll find the mode dial, shutter button and power buttons. The mode dial has eight positions: Auto, Program, Aperture-priority, Shutter-priority, Manual, Smart Mode, Panorama, and Wi-Fi.

Turning the dial to Wi-Fi launches a menu with six options aimed primarily at using the camera with a smartphone, or sending photos and videos to a smartphone. The camera uses NFC (near-field communication) to connect to smartphones, and it's easy to set up. There also is a group share option, as well as a Home Monitor selection that allows you use your smartphone as a baby monitor, for example, using the free app of the same name.

Left of the shutter-release and power buttons is the Mobile button, which sounds duplicative of the Wi-Fi mode dial position. And it is, with its MobileLink and remote viewfinder options also available in the Wi-Fi menu. But it's easier to reach those here. And, using the AutoShare function, you can automatically transfer files to a smartphone while the camera is in shooting mode, without having to change modes and transfer the files later using the Wi-Fi mode and menu.

In case you tire of making all camera settings changes via the buttons on the back panel, you can use the iFn button, which is customizable and offers a total of five settings options, dependent upon the shooting mode. For example, in Manual mode, exposure compensation is not displayed.

iFn menu options:
Shown here is the small external flash (optional) that was included with our test camera. Here, the flash is folded down for minimal intrusion when not in use. When you fold the flash down, the on-screen flash icon shows that the flash is turned off.


This small external flash flips upward on a spring-loaded hinge. Unfortunately, it does not cast around too much light. It was disappointing that even when shooting a subject at fairly close range, the flash tended to produce inadequate results.

With a flash shoe at your disposal, of course, you can get yourself a much bigger external flash to illuminate your subjects.

There are just two ports on the side of the camera, hidden behind a small door with a spring-loaded hinge. So small, in fact, and flush with the camera body that you'll need to get a fingernail in the little gap to spring it open.


The NX3000 stores photos and videos on a microSD card. This provides one convenience - you could slip it into your smartphone's memory card slot. But with NFC and Wi-Fi connectivity, it seems unlikely you'd need to or want to. If you have a card reader that doesn't have a microSD slot, you'll need the adapter that comes with microSD cards.

The camera comes with a USB cable that plugs into the power brick for charging the battery while it's inside the camera. For that matter, the camera battery will also charge while the camera is connected to a computer's USB port. The Li-ion battery has a respectable battery life rating from CIPA of 370 shots (half shot with flash). But, I got a lot further on one charge. Using a fair amount of burst mode and not much flash, I recorded 1,865 photos and nine short videos on one charge.