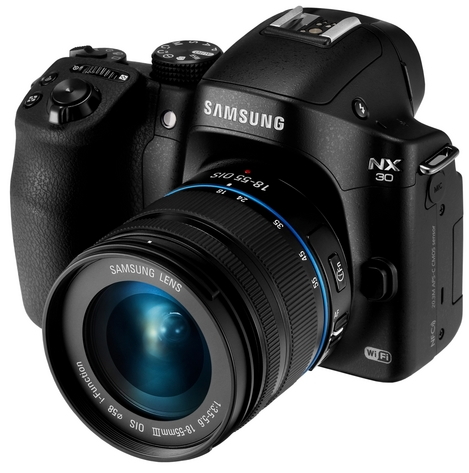 At the beginning of 2014, Samsung's award-winning NX-series got a new sibling soon, in the form of the NX30. It features a 16MP CMOS image sensor mated to the DRIMeIV Image Processor for faster shooting (1/8000 sec shutter and 9 FPS continuous shooting), improved performance in lower lighting conditions, as well as the the NX AF (Auto Focus) System II for a quicker and more even focus. In terms of viewfinders, there are two. The first is a Tiltable Electronic Viewfinder (2.359K dots); the second a 3.0-inch Super AMOLED Swivel and Touch Display. If you need to shoot video, the NX30 has you covered. It can not only record Full HD 1080p movies in 2D, but also in full stereo 3D (with the optional 45mm F/1.8 2D/3D lens). And, there's a microphone input and Live HD Streaming, via the HDMI output, to connect an external monitor or to record footage directly to an external recording device.
The NX30 also boasts the ability to customize your settings, thanks to two Custom Modes on the dial. And, with i-Function and i-Function Plus, shutterbugs of all experience levels can access certain settings, like shutter speed or aperture, at the touch of a button. You can even customize and reprogram existing buttons.
Like most ILC cameras, the NX30 features WiFi and NFC (Near Field Communication) for tethering your camera to compatible smartphones and tablets. With these two technologies, you have access to the following:
"The 'Tag & Go' function lets users tap and share memories instantly and easily, pairing the NX30 with NFC enabled smartphones and tablets. The Photo Beam feature allows the transfer of an image or video to a smartphone or tablet by simply touching the two devices together with no other configuration needed. MobileLink lets users select multiple images to send to four distinct smart devices at one time, so everyone can treasure photos without the need to take repetitive shots on each individual device. AutoShare automatically sends every photo you take instantly to your smartphone or tablet and the Remote Viewfinder Pro function enables control of the NX30 from a smartphone, allowing the user to zoom and snap shots remotely yet still have full visibility of the scene, opening up new photographic possibilities. Manual settings can still be accessed, including shutter speed and aperture, so that photographers can retain camera control yet have another option as to how they want to frame their shot."
Finally, just like the newly announced GALAXY Camera 2, the NX30 comes pre-loaded with the Dropbox app, so users can instantly backup files in the cloud. At this time, it's not clear if buying the NX30 earns you extra free storage, or just the standard amount given to all new customers, which is around 5GB.
Samsung NX30 Features
The NX30 is available now, with a suggested retail price of $999.99. See our buy box in the upper right hand corner of this page to see the best pricing currently online.
Additional Product Views